Osu! And a quandry

You remember, back in 1992, back when you’d played the first Sonic absolutely to death and you were waiting desperately for Sonic 2 to come out, and when it did you burned through it in no time at all and were a little disappointed because you’d spent so much time playing the first game and now the second one was over already?

OK, maybe you don’t, but if you DO, or if you have a similar case where you’ve spent a lot of time playing a game and then blown through the sequel because you’d already gotten good at the gameplay in the original, you can probably understand the feeling of mild disappointment I’m having, having finished: 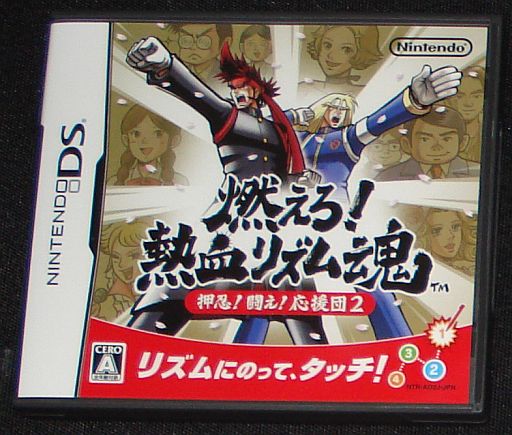 Granted, I was playing it on easy, and I’ll go back and work through it on normal now, and I understand that there are some songs to unlock, so it’s not quite as much of a “huh. That’s it, then” feeling as Sonic 2 was.

But, since I did bring home a few more DS games, I will probably try some of those first.

Either way, I get Kenichi Sonoda character designs and cute girls to play Mahjong against. Suchie Pai has bunny girls and people named after different flavors of pie, but Chu ~ Kana Janshi has catgirls who are also ninja.

It was in the clearance bin of the Ikebukuro Toys R Us, and who am I to turn down a 1500 yen discounted DS game featuring Canada’s national sport?

Update: Minna no DS curling is not only hard, but incomprehensible, so when I saw a mention on the Penny Arcade forums of an English-language curling game for sale in the Great Northern States, I did some googling and… totally failed to turn up anything about it.

But it did remind me that I should really give Minna no DS curling another try sometime.