Sorry for the poor picture quality – Monster Monpiece is the first Vita game I’ve played that disables the screenshot option, presumably for Reasons.

There’s a lot of controversy around MonMon, because it’s a pretty fan-service heavy game in parts, and the western distributor decided to do some pretty harsh cutting before releasing it.  This greatly annoyed the target audience, and the crowd that they were trying to avoid offending still found ample reason to be offended.  Basically, nobody won.

It’s a pity, because even with the self-censorship, it’s still a pretty solid RPG with a fun battle system revolving around collecting monsters, in the form of Magic-The-Gathering-style cards, building up The Perfect Deck of monster cards, and using them to crush your opponent’s deck of monsters.  There’s also a lot of mana management involved, since you only get a limited amount each turn and building a deck full of powerhouses is going to flop miserably if you wind up with a hand full of unplayable cards with high mana costs.

I have been playing MonMon for a few weeks now, and it’s made for the perfect “I have 15 minutes spare” game, since the individual battles are rarely more than 5 minutes or so.  I’ve enjoyed it enough that I’ve actually been seeking out all of the optional battles, and I’m looking forward to the post-credits content now that I’ve finished the story portion.

The post-game content, including the SERIOUSLY overdone final boss fight, took an extra four hours to knock out.  Then, I went back and did a couple of battles I’d skipped on the final road to the final boss fight, and spent a few minutes in the silly card evolution mini-game, and… 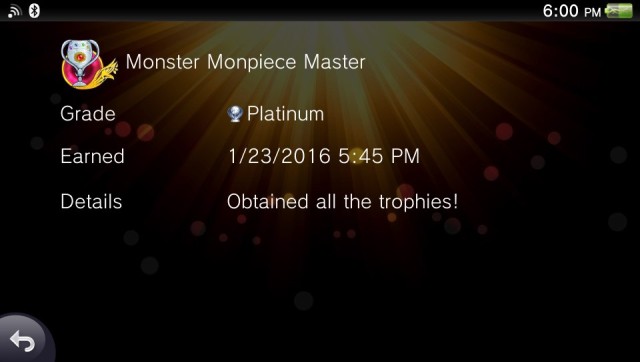 My second platinum trophy ever, woo. It’s been a good month for finishing games.