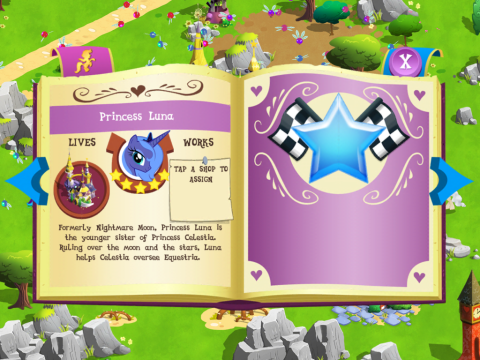 It’s been a couple of months since Gameloft’s My Little Pony: Friendship is Magic application was released, to much initial joy.

It took the traditional “click things and then wait a long time” city building game, added just enough story to give you a reason to keep clicking things and waiting, and packed in enough references to keep the most die-hard fan happy.  Of course, you are going to collect the Mane Six ponies and their normal houses, but you can also earn some of the most obscure background characters and buy some of the weirder shops.

For crying out loud, it has a “Sofas & Quills” shop, a one-off gag from a single episode.

Furthermore, just watching the credits is a little staggering. This isn’t a knocked-together-in-a-weekend license job, it had a serious number of people working to bring it to market.

On the other hand, as released it was one of the most obnoxious cash grabs in the history of freemium games.  Several characters necessary to complete the main story were only available for the game’s premium (read: bought-with-cash-monies) currency, and one quest in particular could be summed up as “Insert $25 to continue” as it required you to buy a particular piece of scenery only available from the cash shop and couldn’t be skipped in any way.

To make it worse, if you’d previously BOUGHT this $25 piece of scenery before getting to this quest, it didn’t count – the quest was to BUY one, not to own one.

I didn’t do the math myself, but I saw a report that the cost of the currency that you would need to buy to play through the entirety of the story was right around $250.

A bit much, for a game theoretically aimed at small children.

Thankfully, the game always phones home for a price list when you start it, so some rather technically-inclined fans put together a small program called PonyLiberator which sits between the game and its servers and serves the game a price list allowing you to buy all of the quest-needed ponies etc with the currency you can earn in-game, or for nothing at all if you’re feeling like just GETTING ON WITH IT.

I abused the heck out of PonyLiberator, and I took advantage of a number of other little exploits here and there to speed up the rate at which I was earning the in-game money and six different kinds of tokens and so on and so forth.  I cheated like a madman, to put it succinctly.

Even WITH that, it still took me nearly two months to play through the main storyline, because I tried to let most things happen at their own pace.

It’s done now, though.  I have restored the sun to Ponyville and Princess Luna is back from her latest little bout with insanity.  She just gets these headaches, you know?

Co-incidentally, Gameloft released an update today which breaks PonyLiberator but which also makes it a little more reasonable to play through without cheating too much – you can earn the premium currency through doing things in game, even if quite slowly, and I understand that they’ve further reduced the price of some of the plot-central characters.

Best of all, the bit of scenery that WAS $25 is now available without spending a dime of real money.

So, kudos to them for finally making their game a little less insane.  At this point, the amount of bad press they’ve gotten is going to be tricky to dig out from under, but I have to wish them the best of luck.