So when you say you “Hunt Spaces”, you mean…?

I was going to lead this post off with silly remarks about how we have very few games about being a futuristic real estate agent trying to find apartments for let, after which I was going to feign ignorance about how this WASN’T that sort of game after all and how it turns out to be a twin-stick shooter and isn’t that unusual and blah blah blah.

After several attempts to make that actually WORK, however, I decided to toss it and play this one more or less straight.

With the holidays and all, there have been quite a few iOS games being sold at bargain rates, and I’m a sucker for girls in skintight battle armor of questionable actual combat utility, so I wound up giving Space Hunter Sandra a try.

Yes, “Space Hunter Sandra”, and let’s just pretend I actually came up with something funny to say about that name. 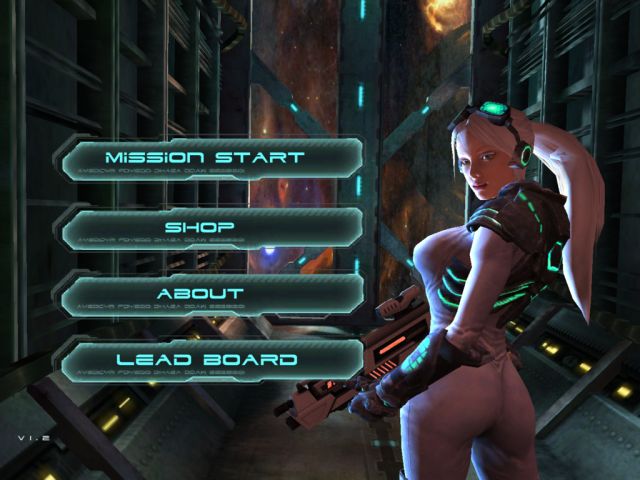 I’m going to say it right now, I don’t think backs actually bend like that.  Moving on.

Space Hunter Sandra is a twin-stick shooter wherein you guide the titular – yeah, I couldn’t resist that – character around one of two environments (you have a choice between space station and desert planet), trying not to get eaten and shooting anything that comes near you.

There’s no real story to be had here.  You play until you either die or defeat a boss, after which you are rewarded with some points that you can save up for upgrades and are returned to the main screen to go again.  Generally, a play session is going to take less than five minutes.

Upgrades come in two varieties – you have functional upgrades for any of your three weapons and your armor rating, which aren’t too dearly priced, and you have entirely cosmetic upgrades which are priced through the roof.  I don’t have any of these yet… …but I am terribly, terribly tempted to find out what the leopard-print battle costume looks like.

Should the process of grinding up points through game play prove to be overly frustrating or slow, you can of course throw down some cash monies to load up on upgrade points.  After playing Gameloft’s My Little Pony game for a couple of months, these actually seem startlingly reasonably priced.

So, if you go for the top tier buy as shown here, you can unlock just about every costume currently available for 9 bucks, if that’s the sort of thing that floats your boat as it were.

And that’s the game right there.  You shoot aliens (there are six kinds in total, though three of them are just the same model in red, yellow, and green palettes) while running backwards around a space station, this gives you money, you upgrade your stuff and you play again and hopefully last a little longer this time.  Rinse & repeat for, oh, about 30 minutes of your life and you can probably call this one done for good.

There is, however, one reason to recommend Space Hunter Sandra – at least, if you remember the halcyon days of the Gamecube.  You can put SHS into third-person mode, and it looks like this: So, for the minute or so that you actually survive in this mode (not being able to see behind yourself is a bit suicidal), you can pretend that “Starcraft: Ghost” actually made it to market, just a decade late.

And then you can sob quietly because it didn’t actually happen and never will.

1 Response to So when you say you “Hunt Spaces”, you mean…?