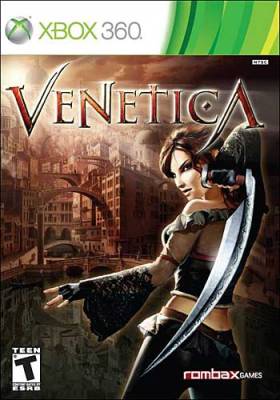 A couple of years ago, I saw a preview in Game Informer for an upcoming RPG called Venetica. It didn’t have a whole lot of information, just that it was a fantasy RPG set in Venice, which stood out as an interesting place to set an RPG and which triggered my “check this out once it finally gets released” flag.

I didn’t think of it again until I saw a copy in the wild – at which point it was already marked down to 10 bucks. I don’t think this thing did well for itself in the marketplace.

Still, for 10 bucks, I figured that it was worth checking out to satisfy the vague sense of curiosity that had been sticking around since seeing the preview.

Within my first hour of play, I had died once – and found out that the game doesn’t autosave and that there are no checkpoints – and accidentally walked off the top of a ladder once and had the game fail to notice that I was now levitating several feet off of the ground and could run out of the game area and do stuff like walk through mountainsides to see the unfinished void beyond.

I was starting to think that a one-word review might suffice.

For the record, that word was “clunky”, which I thought got across my feelings towards the game without getting needlessly scatological.

Nonetheless, I persisted and reloaded and restarted again and gave it a third go, and this time I managed to stick it through to the end without encountering more than a couple of game-breaking bugs – and being good about saving manually every 30 minutes or so and using multiple save slots meant that I was never hindered for too long by either.

To get back to the game:

Venetica is an action RPG wherein you discover that you, playing the role of the orphan with the mysterious past whose mere presence gets the majority of her neighbors slaughtered, are actually the only one who can thwart the machinations of a powerful cabal of people trying to cheat death and also co-incidentally the daughter of Death, though just how an anthropomorphic personification of death HAS a daughter isn’t adequately explained for some while.

It doesn’t, you might gather, tread any particularly new ground in its setup, though having a female lead is a bit of a novelty.  To further the novelty, the first several armor upgrades you pick up actually provide better coverage – it isn’t until quite late in the game that you start picking up armor that follows standard fantasy rules for female characters.

After discovering your unusual parentage and dealing with the loss of your fiancé, you go through a quite linear series of quests designed to familiarize you with the combat system and navigating the world and so forth.  I actually managed to miss several of these quests on my first attempt at starting the game, including the quests teaching you how to actually fight without getting killed, which leads me to my next point: this game does not hold your hand and has no problem allowing you to venture into dangerous places before you are really ready for them.

If you DO find the quest series that guides you through leaving your formerly-peaceful life in a small village, you eventually make it to Venice and are greeted with a questsplosion. There is a main story quest, of course, but there are also side quests – some of which only become available after cultivating a high enough reputation with the populace – three separate and competing guilds to join, each with their own stories and set of quests, merchants who actually buy items at different prices depending on their specialties, a day and night cycle and NPCs who have their own schedules, meaning that you can’t rely on the guy who sells bread being open in the middle of the night when you get a hankering for bread…

It’s a surprisingly ambitious game. I’m not sure if it necessarily counts as a sandbox game because I’ve never been clear at what point you can make that determination, but it gives you a lot of things to do and then lets you decide the order in which you do them or skip them as you choose – barring major story quests, of course.

Mind you, it doesn’t QUITE live up to the ambition. The quests are hampered by a quest marker system that does a very poor job of pointing you in the right direction, dialog is strung together from phrases that obviously weren’t recorded at the same time or with the same levels, so quest givers speak in this weird quiet, LOUD, quiet pattern, and I actually failed one quest before I was even given it. (I stumbled across the items you were supposed to collect before meeting the guy who asked me to collect them, and when I finally got to the quest giver he thanked me for the items but chastised me for killing a guard who had jumped me in the process of collecting them.)

Oh, and combat is a mess, partially because your character never gets to the Bad-ass end of the power scale. Your character gets 3 attribute points to distribute every level, and putting all 3 of them into constitution only gets you six more hit points in a game where enemies regularly hit you for 40 to 60 points of damage. You get occasional armor upgrades, but they only serve to reduce damage from certain kinds of weapons and it’s never very clear what sort of armor you should wear against given enemy types.

Furthermore, getting hit once often results in being stunned momentarily and getting hit again before you can recover.  This leads to embarrassments like, oh, getting swarmed by lobsters at level 20 and killed, even though I’d been fighting the same lobsters since level 5 – I just failed to dodge properly and wound up in a chain of attacks I couldn’t break out of before being clawed to death.

Simply put, should you decide to give this a go, just set the difficulty to “easy” and save yourself some heartbreak.

To somewhat offset the difficulty of physical combat, your character does get spells.  These ARE your saving grace against many of your opponents, but most of the tougher fights in the game feature opponents who are entirely immune to all forms of magic.

So, yeah, you’re back to hitting them with sharp pointy things and dodging a lot.

This is particularly obnoxious at the game’s end. At the game’s penultimate moment, you unlock the Ultimate Spell Of Ultimate Badassery, a spell that allows you to summon Death himself (hi, Dad!) to wreak havoc upon your foes.

At that point, the only thing standing between you and the final boss fight is a hallway full of mooks.

The Ultimate Spell of Ultimate Badassery, then, can be used in roughly a half-dozen fights, more if you go looking, all against opponents who you have already been fighting and who are actually rather less dangerous than the lobsters.

This is perhaps a small failure of pacing.

Still, I enjoyed my time in fictional Venice. I found myself genuinely fond of some of the characters by the time the ending credits rolled around, and it’s a small flaw to complain that a game was “too ambitious” in its design. It fell short, at times, from what it felt like the developers were TRYING to do, but it felt like a game put together by people who genuinely wanted to make a good product and just wound up missing the mark at times.