OK, now, THIS is shameless pandering.

The concept of “unlockables” in games has been around since, oh, shortly after some bearded guy in California got the bright idea to simulate table tennis with a CRT and a handful of discrete logic ICs.

As far as rewards go, it’s turned out to be way better than the old “high score” concept at keeping us gamers pushing the buttons.  It’s that whole positive-reinforcement thing, with shinier outfits, faster cars, or new songs taking the place of food pellets.

Visual novels are really big on the unlockables; pretty much every one I’ve ever seen has a sort of stamp-card menu where you can review significant scenes from the game after you’ve seen them the first time.  This also encourages multiple playthroughs, since there’s no way that you’ll see everything on the first pass.

Since visual novels are pretty much choose-your-own-adventure books, it’s really tempting to hit “save” every time you get to a point where you’re asked to make a decision.  If you’re trying to go through the visual novel several times to see all the endings, it’s much faster to restore those save points instead of going through the whole story again from scratch.

Enter Omegane Teacher’s way of discouraging this, which is to give you, for every time you start a new game and finish it, your choice of one more style of eyewear for Sakurai Saya to wear: 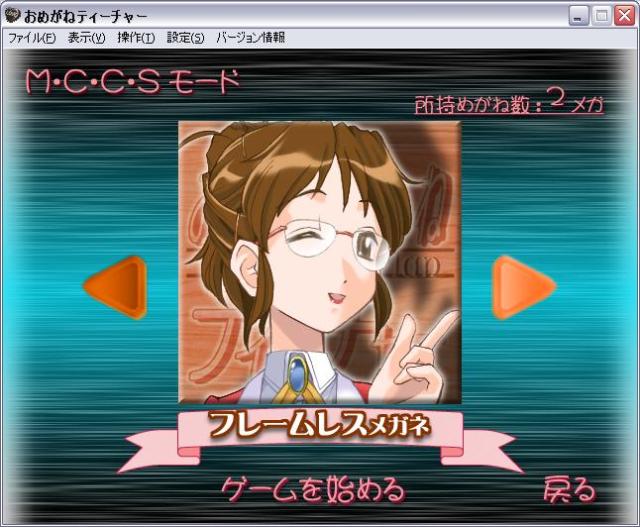 It’s good to be pandered to, but this might be pushing the limits.  🙂