I have not lost my way.

Posted on October 9, 2008 by baudattitude

It has not escaped my attention that, with all the dungeon sieging and dooming and quaking and racing of late, I have become seriously at risk of losing my “pervy fanboy” credentials.  The occasional nekomimi-themed wallpaper doesn’t do much to offset that.

With that in mind, I’ve bumped “Lego Batman” and “Bioshock” from their priority slots in the “hey, play this next” queue, in favor of a couple of titles that have more potential for making my wife shake her head in disbelief and resignation.

On the portable front, I’ll be tackling Izuna 2 : The Unemployed Ninja Returns.  The first game featured bespectacled shrine maidens, which is pretty much my definition of Quality.

I will admit that I am easily bought.  Now I just have to hope that Tsubaki appears in the sequel.

I know, I know, there are other, you know, MAIN characters, but if it’s wrong to play through an entire RPG just because one of the minor NPCs is a cute girl with glasses, I don’t want to be right.

Speaking of which… The other thing I’m trying out is a visual novel called “Omegane Teacher”, which I couldn’t avoid buying.  It’s by Studio Miris and, well, it’s a game for boys who like girls with glasses.

It is, of course, an almost entirely text-based game presented in a language I don’t understand very well, so I am expecting a certain degree of difficulty.  I’m hoping that familiarity with the thematic stereotypes will compensate, somewhat, for the lack of language skills.

For example, it took only knowing a few kanji to get the fact that the main character doesn’t have parents at home because they’re “working overseas”, which is a genre stereotype second only to, I don’t know, the whole “perfectly ordinary school girl turns out to be the only hope for the universe and truth and justice and stuff” stereotype.

So far, I’ve only played for a few minutes, enough to find out that it starts on Valentine’s Day. Traditionally, this is when women give chocolate TO guys in Japan, with the guys expected to reciprocate a month later on “White Day”, and I have in fact already gotten some chocolate from one of the other characters, with a second character obviously wanting to give me chocolate but too embarrassed to do so.

I’m guessing that the story will be based around the period between Valentine’s and White Day, leading up to the main character making a confession on the Day Of Truth and getting either a) lucky or b) rejected.

Just in case you were curious, here’s the character breakdown:

It wouldn’t make much sense to have a game called “Omegane Teacher” if it didn’t prominently feature a cute teacher with glasses. 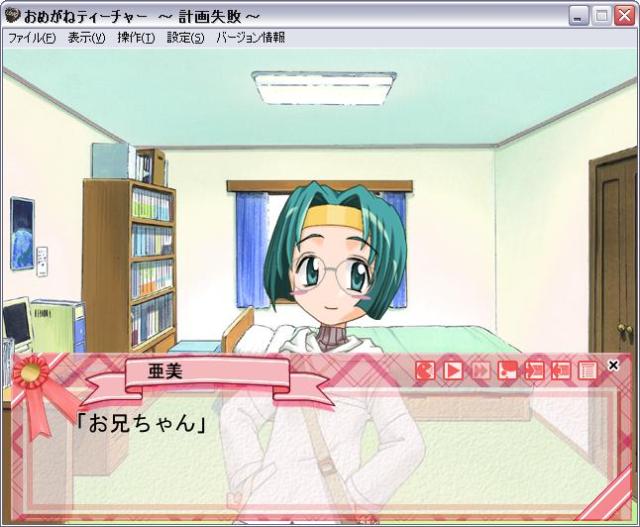 Every High-School-Guy-Whose-Parents-Are-Working-Overseas needs a Little-Sister-Who’s-Not-Related-By-Blood character.  Ami fills that role.  She’s also evil – Sure, she spends an entire day slaving away in the kitchen to make you a nice yummy chocolate cake for Valentine’s day, but it’s drugged as part of her – would it be redundant to say evil here? – evil plot to make you fall for her. 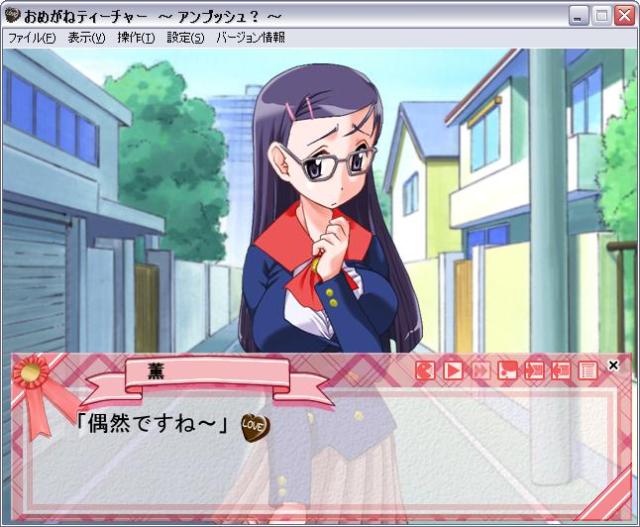 Kaoru is the Childhood Friend Who’s Too Embarrassed To Admit Her Feelings character, rounding out the stereotypes nicely.

I’ll keep you posted on how it works out.

2 Responses to I have not lost my way.