Posted on September 17, 2019 by baudattitude

A few years back, I picked up an 8bitdo SNES30 controller for use with emulators, and it’s gotten a new life recently thanks to 8bitdo updating their firmware to add Nintendo Switch compatibility.

Granted, it was a pain to actually get paired to the Switch.  And it doesn’t have a USB-C interface for charging, and I’m sure I could find all sorts of other things to complain about, but it works very well for 2D games.

Look, basically I am trying to get across my general happiness with the company’s product line.  Moving on.

In addition to selling bluetooth controllers that are basically clones of 8-and-16-bit console controllers, 8bitdo sells a line of replacement boards that add bluetooth functionality to your existing old controllers.  Well.  Technically they “rip out the guts of your old controllers and swap in a new PCB” but that doesn’t sound as nice.  They cost about twenty bucks, which is pretty cheap compared to a new gamepad, but I’ve never felt like I needed one…

…and then they released a PCB for the Sega Saturn controller, which is probably the apex of 2D gamepad design.  I have a lot of Saturn hardware lying around, but it’s pretty rare that I hook up an actual system.  I do use the controllers quite often, however.

Up until now, I have been using a very clunky “PC Joy Box” that worked but that was kind of a pain to haul out and hook up. So replacing that wired solution with a wireless one sounded like a dream.

Problem is, I was an early Saturn adopter.  Like, “we’re going to launch the system five months early to get a head start on the 32-bit console wars and how could this possibly have any negative effects?” early.  So most of my controllers are the original MK-80100 style, not the later MK-80116 controllers that were the standard controller in Japan and other civilized regions. 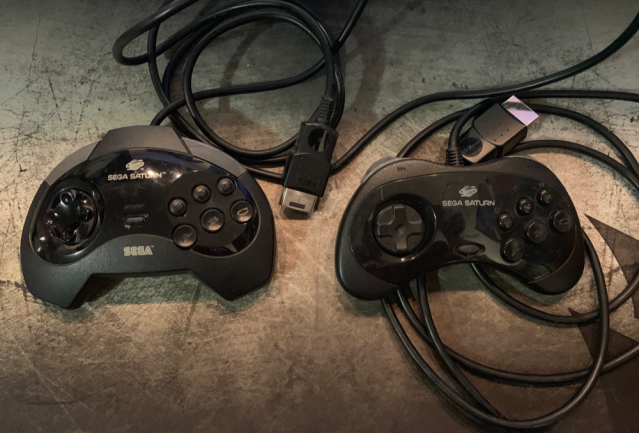 The 8bitdo site only shows the MK-80116 controller, but I figured I’d order the board and see if it could work with the larger controller anyway.  Worst case scenario, I DO have one MK-80116.

The board came in, I opened up the controllers to see (side note, screws that have been in-place for 24 years do NOT like to budge), and… 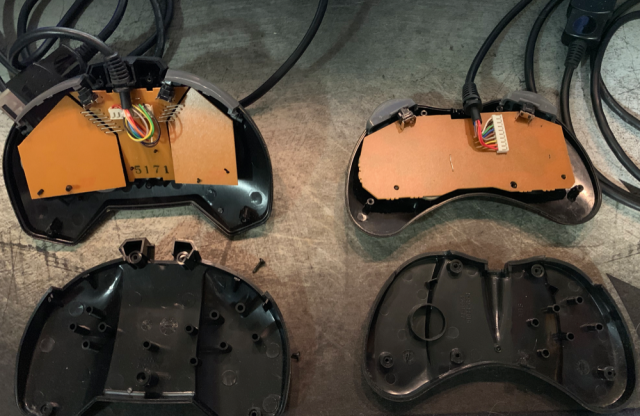 …yeah.  The two controllers have completely different guts.  The MK-80100 has a weird three-part PCB connected by jumper wires that frankly give me the screaming heebie-jeebies, so I closed that one right back up and will pretend I didn’t see it.

On to the new PCB!

The bluetooth kit has the new PCB, a charging cable, a little screwdriver, and a bag to store your old PCB and cable.  That’s a nice touch.  Folding knife not included.

It took like 30 seconds to swap the boards, mostly because the conductive pads did not want to lift off the decades-old PCB.

Syncing it was literally as easy as opening the bluetooth preferences pane and pressing the start button on the gamepad, then selecting the “8BitDo S30 Modkit” device.

Seriously, I am not used to things behaving quite this nicely.

Downsides, because there are a couple:

1) The PCB includes replacement switches for the shoulder buttons, and they are softer than the original Saturn microswitches. You lose the lovely sharp click.

OpenEmu, on the other hand, works just fine.

One thumb up. It would have been two thumbs, but I had to take a photo with the other hand.

All in all, a very positive solution to the “I have a bunch of old controllers around and would like to find a use for them” problem, which is… well, it’s basically the definition of a First World Problem but I live in the first world and I have problems here.

2 Responses to On Controller Resurrections