As I mentioned in a previous post, I’ve been playing a fair bit of Ghost Recon: Wildlands with a friend, and quite recommend it. As a caveat, I haven’t played previous Ghost Recon entries to know how well it fits in with the rest of the series. So this may be like the Metroid games, where I’ve only played The One Everyone Hates and enjoyed it.

I have been vaguely curious, however, as to why the game starts off with a disclaimer every single time you boot it. 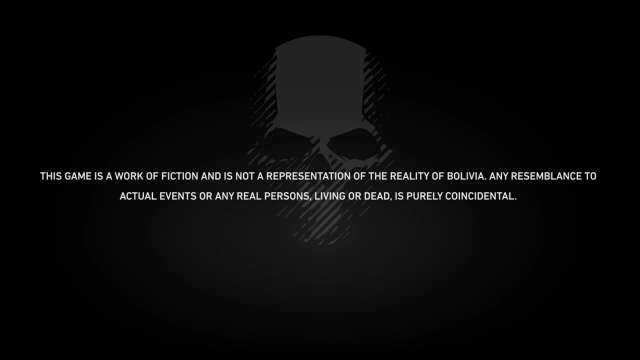 I mean, I get that they want to cover their bases in the event that they are seen as misrepresenting Bolivia, but in the process of brutally killing hundreds of armed cartel soldiers, being hunted by corrupt military forces, propping up a homegrown rebellion, and generally sowing chaos across the entire country, I haven’t seen anything to really warrant the disclaimer.

OK, take a minute to recover and let’s talk about what we’re looking at.

These are obviously standard NEMA 5-15 Grounded electrical outlets. Someone deliberately modeled these and put them in the game. They kind of clash with the wall texture but let’s not get pedantic.

You would never find these in Bolivia. You might find NEMA 1-15 UN-grounded outlets, or CEE 7/16 “Europlug” Type C outlets, but these? No. Someone messed up, big time, and it somehow got through QA and into the final product. This in a game with probably about a $100 million development budget.

What I don’t get is why they didn’t just replace the texture instead of slapping on a big old disclaimer you have to sit through every time you start the game.

Anyway, I’m going to try to put this aside and just enjoy the game, regardless. Still, it’s definitely going to count against it in the final score.

This is the sort of observation that drives my friend a little crazy when we are playing games together.

Side note: My other Ghost Recon thought of the night was that the game could be greatly improved by having a squad member, preferably named “Carl”, who was a total botany nut and who would always be rattling off Interesting Plant Facts during covert operations. and that LB could be mapped to the “shut UP, Carl” feature instead of “Throw explosive” which  I feel would be far more interesting.

Side side note: I call out LB specifically because I have been playing a lot of FFXIV, where LB is the adjust camera button, and the result is that every one of our Ghost Recon sessions starts with me loading into game and immediately throwing a grenade, which usually blows up whatever transport he has painstakingly collected for us.  I’d rather my character just randomly shout “shut UP, Carl” at the start of each session.