I’m pretty sure that “Jump into an MMO expansion as soon as it comes out and rush to hit the level cap and the end of the storyline before you can get spoiled” ranks pretty high on the list of “ways to burn yourself out on an MMO”, but remarkably I managed to pull it off with the latest FFXIV expansion without actually wanting to hurl the PS4 out a window as soon as the credits rolled.

It helped that the expansion was really good.  More about that later, but first I would like to talk about something more fluffy.

Well, in this case not so much fluffy as “presumably fluffy, under the full plate armor”.

A major selling point of Shadowbringers – apart from, you know, a storyline long enough to easily qualify as a full RPG in itself and the addition of two character jobs – was the addition of Viera, the bunnyesque race from FFXII and the other Ivalice games.

Oh, and I guess they added Hrothgar, too.  You remember the useless blue dude from FFX?  Those guys.

Going strictly by FF lore, Viera should be super rare to see. They are reclusive to the point of xenophobia and having the temerity to leave their home town is a one-way trip since you won’t be allowed back in.

Now, FFXIV heavily discourages creating multiple characters and instead allows any character to do any and all of the available jobs, so alts aren’t terribly common.  A race change, however, is a mere $10 in the cash shop…

What I’m saying is, the suits at Square-Enix did the math on “How many players do we have?  What percentage do we think would like to be a giant humanoid rabbit?  Multiply that by ten bucks is HOW MUCH money?” and said “screw the lore, bunny girls for all!”

To their sole credit, they didn’t make fall into the trap of making them especially cute.  They’re one of the taller races and their emotes and animations are pretty …rugged? Rugged is a good word.

Or, as I like to say, the options on the FFXIV character creation scheme for “furry” and “lolicon” are presented as a radio selector, not as checkboxes.  That would be more Tera’s thing.

Enough about Viera.  Moving on. Let’s talk about the story in vague terms.

Ever since the reboot of FFXIV, the story has been broken up into releases, where you get a massive chunk of story and then some credits roll, and patches, where they slowly dole out story content over the life of an expansion.  Shadowbringers is a sequel to the patch story that took place between the game’s first and second expansions, so they have had this one sitting on the back burner for some while.

It also wraps up the storyline for the 24-man raid content from the base game.  They did some digging into the past to find plot threads to tie off, is what I’m saying here, and explained a ton of mysterious foreshadowing from the last few years while setting up some new mysteries which will presumably get sorted out in the post-release patches or maybe in a future expansion.  I was really happy with how it went.

It’s also easier to experience the story this time, thanks to the addition of “Trusts” which are a bunch of non-playable characters who you can team up with in order to do certain kinds of group content.  Since previous expansions have had the problem of telling you to go and clear a dungeon and then letting the main quest line grind to a halt while you try to get other people to clear the dungeon with you, this is a massive quality of life change.  Not only can you do the story dungeons at your own pace, but the NPCs are programmed to clear the dungeons successfully, if not particularly quickly, so learning fight gimmicks can just be a matter of watching what they’re doing and trying to keep up with it.

Speaking of which, boss fights are really well-designed to teach you the fights in Shadowbringers.  They almost always consist of the boss using an attack, followed by a pause, then the boss using the same attack again and maybe making it a little more complex, and then a third time but maybe combining it with another attack so now you have two things to dodge…

Basically, it’s a really subtle form of tutorialization, which my browser is trying to tell me is not a word.

In between dungeons, there is a great deal of running hither and fro and meeting people and doing quests, some of Great Import and some where you are, well, delivering sandwiches.  The Warrior of Darkness has a very busy life.

There are a lot of “kill ten rats” style quests in all this, but at least the game has a sense of humor about it. 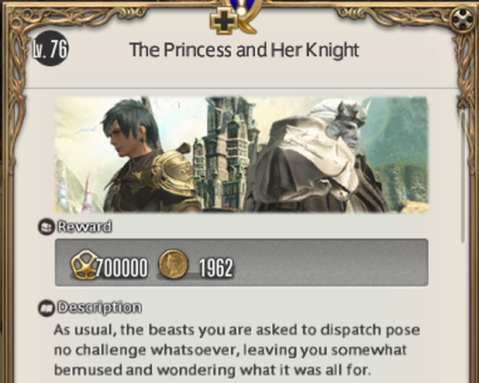 This is actually where one of my small quibbles with the expansion comes up.  As is traditional for FFXIV expansions, you aren’t able to use a flying mount until you have finished all of the quests for an area, and the zones are really quite dense with aggressive monsters, frequently with the rats you DON’T need to kill mixed in with the rats you DO need to kill to satisfy an NPC’s lust for rat blood.  I got into a lot of little fights I would have preferred to avoid.

After the sandwiches have all been delivered and the expansion’s Big Bad sent packing,  there’s a bunch of optional content.  Naturally, this is divided into stuff that you can do easily, which is for filthy casuals, and stuff that you can’t manage to beat, which is obviously designed for no-life try-hards.

I may have stolen that from a George Carlin sketch about drivers.

Anyway, I haven’t done much of the optional content, but it’s where you go to make your numbers bigger.  I am invested enough in the game that I WANT to make my numbers bigger, so I will be digging into that this weekend. 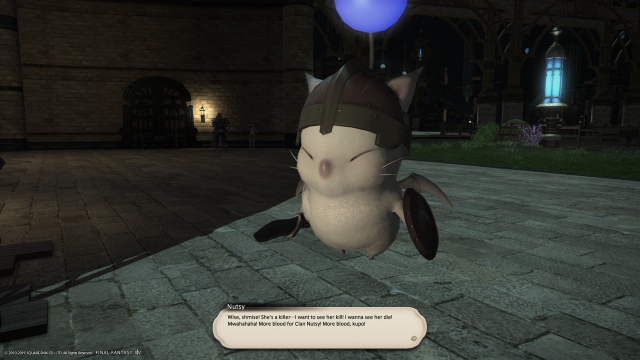