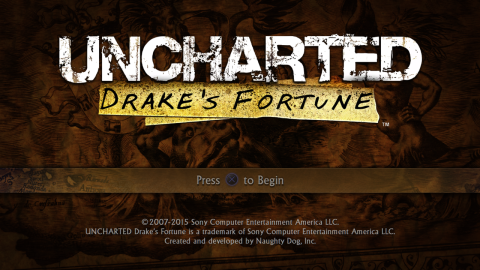 While I talk a lot about specific games on here, I don’t really consider my posts to be “reviews”, and I certainly don’t assign scores to any of the games I talk about.  If I finish something, I think it’s probably worth playing, unless of course I am finishing it just out of guilt for having spent money on it.

Also sometimes – often! – I will play a game just because it has cute characters.  I’m not particularly deep.

Despite my no-score policy, sometimes I find myself playing something that is just so definitively the example of a specific number that I can’t help myself, and that’s my rather mediocre segue into a few paragraphs blathering on about Uncharted: Drake’s Fortune, a perfectly enjoyable game but oh-so-much the archetypical example of a 7/10.

I am, to be sure, a decade late to this particular game, but in fairness I DID try to play it back when it originally released. I downloaded the demo from PSN, cheerfully walked through a lush jungle environment for a couple of minutes, and then was asked to cross a log while balancing myself with the Sixaxis controller.

Three or four attempts later, I came to the conclusion that, even if I ever got across the stupid log, there would probably be plenty of other opportunities to be asked to do similar things later on in the game and that I should probably not even bother playing it.

On the other hand, people rave about Uncharted 2, and to a lesser extent Uncharted 4, so I’ve always been a little curious to go back to the series.  Just, you know, not with the dumb logs.

The dumb, dumb, DUMB logs.  My vocabulary today is not especially varied.

Then came the “Nathan Drake Collection”, which bundles up shinier and prettier versions of the first three games and takes out the balancing bits.  I could not have asked for a remaster more closely in-line with my interests, so I waited until it was on sale for 8 bucks and bought it so it could sit comfortably in my backlog.

Now that I’ve actually taken the first game OUT of my backlog and given it a run-through, it’s… well, it’s OK! I think I’ve covered that with the whole seven thing.  It’s very much an example of a game trying to be Cinematic, and there were a lot of times where I felt that I was just pressing forward and occasionally hitting X to jump on my way to the Next Big Scripted Moment, but it has enough Cool Scripted Moments that I didn’t mind the sensation of being on an amusement park ride TOO much.  I got into scrapes, I met some suitably villainous villains, I was startled by the Big Twist about 2/3rds of the way through, I eventually Saved The Girl and sailed off into the sunset.

I’ve heard the series described as “Dude Raider”, so I was expecting a lot of clambering across the walls of tombs and jumping from one precarious handhold to the next and falling off things and dying a lot.  I got that in spades, by the way, and by and large it was pretty enjoyable stuff.  I’m knocking a point off here, though, because I didn’t feel like the platforming followed a consistent set of rules.  At times, it felt like whether or not I could make a particular jump depended entirely on whether I was doing what the game wanted me to.  That’s a personal sensation, so I may be being unfair.

I also wasn’t QUITE expecting the game to have such an …emphasis on combat.

Basically, for a lovable scamp, Drake spends an AWFUL lot of time playing “insert bullet A into bad guy B” and there were a lot of times when I’d wind up replaying a combat arena for the nth time, knowing THIS time that after I killed THESE four guys that another guy was going to spawn on THAT ledge with a grenade launcher so I needed to be ready for him and oh god can we JUST GET BACK TO THE PLATFORMING ALREADY.

So, that knocked another point off the score and took it down to an eight.

It lost the final point for committing the greatest sin you can commit in a game:

This is a waterfall.  I am in a cave behind the waterfall.  There’s nothing cool back here.  It’s just a little depression in the cliff face that you can walk through the waterfall to get into.  Seriously?  Put something cool in here and we’ll talk about getting you your eight back.  For now, you get a seven.

8 Responses to A Perfect 7.