Ashen: I couldn’t think of a funny post title.

Posted on January 6, 2019 by baudattitude

Let’s be clear.  I had a wide variety of post titles to choose between, but in the end I couldn’t decide between making a funny play on words involving “ash” or making a Souls reference that would be ever-so-clever but probably hopelessly opaque.

So, let’s set that aside so I can talk about Ashen, which is the latest “Like Dark Souls, only…” game to hit the market, and which gives us nutters something to do between now and whenever Code Vein and Nioh 2 come out.

Like Dark Souls, Ashen takes place in a bleak and dying world.  If you watch the introduction, you’ll learn that the world was created by a dying raven or something and its final breaths gave birth to the ages of man and, uh, honestly it seems like someone put an unusual degree of thought into their world’s mythology and I would be doing it a disservice to try to describe it.

Anyway, that raven died, a new one is about to be born, this is a Generally Good Thing but of course there are some Bad People who are quite happy with the whole bleak and dying world status quo and would like to keep it that way.  Enter you.

Setting the lore aside, some of the writing is exceptionally odd. 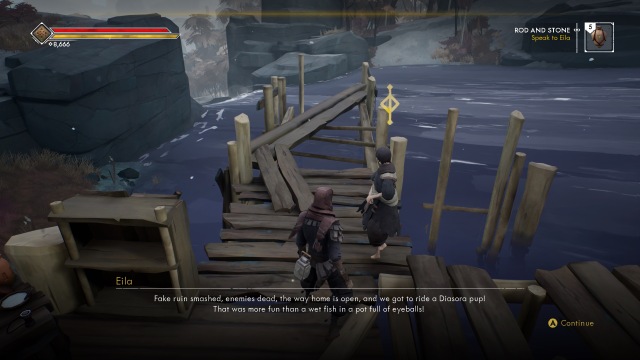 As you may-or-may-not get from the only screenshot I took during my play through, Ashen has a very interesting low-poly aesthetic, and I quite fell in love with it.  It’s also populated with NPCs that are much more talkative and generally less depressing than your average From Software game, and part of the appeal of the game is that you start out in a tiny encampment that you have taken over from a bunch of bandits and eventually turn it into a bustling and happy town full of all the people you meet on your travels.

It’s also Like Dark Souls, Only You Play With Someone Else.  You will always – unless you turn them off – have an NPC accompanying you on your slow quest to make the world less awful, and these NPCs are generally very helpful.  It’s good to have someone along to take aggro from a boss while you’re desperately trying to heal, or to help you on to ledges and so forth.  They’re not always going to be NPCs, though – part of the way the game works is that other players on the same quest as you will automatically be put into your game and you will see them as the NPCs that have suddenly mysteriously decided to start running around and picking fights you weren’t quite ready for yet.  Likewise, they will see YOU as the NPC in their game who is now hanging back and not supporting them as they charge into a bandit camp.

I turned the passive multiplayer off after a while.  I turned it back on eventually.  More on that later.

It’s also Like Dark Souls, Only A Lot Smaller.  It’s a very flat world and is split into a handful of very contained areas.  There aren’t any clever shortcuts between zones, and it basically divides into “The world you can get to before the third boss” and “The world you can get to after you get a movement skill from beating the third boss.” There are five big-health-bar-dramatic-music encounters in the game, and the first four of them are, frankly, kind of on the easy side.  Two of them are located at the ends of a couple of long and very nasty dungeons, so the process of getting TO the boss is the real challenge.  You also can’t save and quit in the middle of a dungeon – if you need to exit the game for any reason, you will load back in at the checkpoint outside the dungeon on your next play session.

Fortunately, both of these dungeons come with a convenient checkpoint just prior to the boss door.

The fifth boss fight, well, it’s a real corker.  The last boss is a real front-towards-enemy affair, where if they are pointed at you then you had best be dodging.  You don’t have very big windows to actually retaliate, and the line between landing a hit and getting too greedy and getting slapped down for 80% of your health bar is a very fine line indeed.

There is also no going and grinding up a bunch of levels somewhere to trivialize bosses.  Your health and stamina upgrades almost all come from quests, and there are a limited number of quests.  If you’ve done all the quests and a boss is handing you your own ash on a platter, you have limited options outside of getting better at dodging.

Anyway, this is why I turned the multiplayer back on, because the NPC companions were getting flattened and I wasn’t up to doing all the heavy lifting on my own.  I sat at the boss door for a little while, another player came along, we teamed up and played Boss Aggro Tennis for a good ten minutes and emerged victorious.

Other It’s Like Dark Souls, Only include “Only with no magic” and “Only without extensive build customization” and of course “Only rather less expensive” which is a nice thing to see in a marketplace of $60-and-then-there’s-a-season-pass-of-course releases and which makes up for the smaller world and the rather shallow skill options.  The game throws a variety of pointy and bludgeoning toys at you – no swords, though – and the entirety of your “build” comes from playing around with all of them and picking a moveset you like.  In my case, I started with a simple club, picked up a SPIKED club a few minutes later, and then just kept upgrading that spiked club until the end credits.

Side note on that whole “Only rather less expensive” thing.  The Xbone version is available on Gamepass.  So, if you subscribe to Gamepass, or if you picked up the $1-for-a-month deal over the holidays, or if you still have that free month of Gamepass voucher kicking around in your Xbone box, Ashen is an exceptional value.  It’s 40 freedom dollars otherwise, or roughly 40 of whatever your local currency is.

A final note on Ashen, specific to the Xbone version: It has many 17-point achievements, and quite a lot of them are entirely optional and yet VERY easy to knock out when you decide to do them.  What I’m trying to say is that if, say, you played Otomedius G back in 2010 and wound up with an odd gamer score afterwards…

5 Responses to Ashen: I couldn’t think of a funny post title.