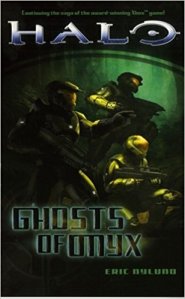 Halo Month continues, with wrapping up Halo 2 and reading the “Halo Graphic Novel” and “Halo: Ghosts of Onyx” before playing Halo 3, then continuing to the books “Halo: Contact Harvest” and “Halo: The Cole Protocol” and Halo Wars.

The sad thing is, I think I may have read more books this month than I usually read in any given SIX months and they’ve all been these borderline-young-adult military adventure fiction things.  I have shame.

Halo 2 was… well it started well but honestly it had me kind of rethinking this whole plan after I got past the first few levels. It’s a game where you spend most of your time shooting at things that are trying to kill you, but so many of the guns are just terrible and it really felt like they deliberately dropped ones that people liked in the first game. The first Halo is… well, it’s clunky but it’s from 2001. That earns it a lot of forgiveness-by-context. I felt less inclined to forgive a game from three years later.

The Halo Graphic Novel is, I think, the first Halo media tie-in that seemed entirely skippable, and in fact I think I’m going to skip all of the comics going forward. If anyone reading this has any particular opinions on ones I SHOULD read, I’m open to advice.

Ghosts of Onyx continues the wacky adventures of Doctor Halsey and the Other Spartans Who Aren’t John. I am continually amused by the fact that all of these genetically-enhanced super soldiers have boring names. It also makes it easier to keep track of them, which is always my problem with fantasy and science fiction names. As an example, I can’t remember a single elf from Lord of the Rings except for Legolas, but I can remember “Linda the Spartan” JUST FINE. Anyway. It was a good read, as media tie-ins go, and I’m starting to feel a lot more connection to the overall story. So that’s a recommend from me.

Halo 3 was genuinely enjoyable, which was a really good thing after slogging through the first two games. I will admit a touch of impatience with “Cortana”, but… setting that level aside I thought it was well-paced and brought back all of the better guns from Combat Evolved and generally wrapped up the trilogy in a neat bow – the final scene is just full circle to the introduction of the Master Chief, and I think I’d have been perfectly content if they’d stopped making games at that point.

Plus, TANK BEATS EVERYTHING and the other random marine chatter will never stop making me giggle.  I think Bungie realized that they were in danger of being a little too stodgy and decided to lighten the mood a bit.

Contact Harvest and The Cole Protocol were prequels, so by-and-large less important. They have a lot of scenes written from the perspective of the Covenant races, so they’re probably mostly books to read if you’re curious how the …you know, what I said about Elvish names? It goes double for the alien-language names they gave to the Elites and Grunts and such. I will, therefore, ignore the alien names and say that if you’re curious how Grunt and Elite and Brute societies work, these are a good couple of books to read. If you don’t particularly care about back story or alien anthropology, they’re skippable.

Telling stories from the point of view of one of the Grunts seems to be a particular theme in the Halo novels, and they come off as quite the sympathetic underdogs. That won’t stop me from sneaking up on sleeping grunts in future Halos and putting a sticky grenade on them so I can watch the fun, mind you.

Halo Wars was the first new-to-me game, since I hadn’t played it on its original release.  Fortunately, while it’s not included in the Master Chief collection, there is a remastered release and I didn’t have to track down the Xbox 360 version.  I wasn’t really looking forward to it because I have never been much of an RTS player and I was expecting to have to constantly repeat levels and wasn’t looking forward to that kind of time investment.  I decided to set it to “Easy” and just grit my teeth and power through, maybe abusing the heck out of quick-save along the way.

It turns out, “Easy” really IS “Easy” and I needn’t have worried. I did feel a little rushed by the two levels with time limits, but the others were just a lovely peaceful experience of building up my home base – or bases – into impregnable fortresses and maxing out tech trees and finally rolling out with a ridiculous amount of infantry and armor and just steamrollering everything else on the map. It was a very enjoyable seven hours from opening to end credits and well worth the ten bucks it cost me.

I don’t actually know whether it DOES let you save mid-level, come to think of it.  I never felt the need to stop and save the game.

As a side benefit, it’s a Play Anywhere game so I was able to play it with a keyboard and mouse. I understand the controls are decent even with a joypad, but why handicap myself?

It IS 100% a side story and could easily be skipped, but you would be missing out on an enjoyable game and some cutscenes with a delightfully snarky AI.  Strong recommend.

Next up is, uh… Halo: ODST, followed by one book, then the animated “Halo: Legends” anthology and Halo: Reach. Then I have FOUR books to read and a movie to watch before I can start Halo 4.

Like Loading...
This entry was posted in PC Gaming, videogames, xbox, Xbox 360, Xbox One. Bookmark the permalink.