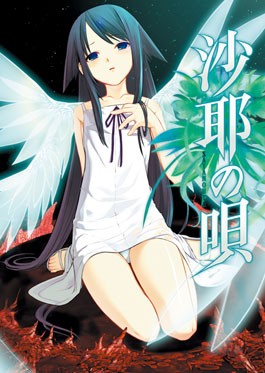 I’m not the best person to talk about visual novels, because it’s a genre that I rarely have patience for.  While it’s probably unfair, I associate them with the old “Choose Your Own Adventure” books, which were 99% horrific endings and painfully frustrating unless you cheated by, say, looking through the book until you found the good ending and then figuring out the chain of pages that would bring you to it.

I also used to take apart my Rubik’s Cube.  So sue me.

On the other hand, I do enjoy a good horror game, and some of the most-highly-spoken-of are visual novels.  I’ve been sitting on the Corpse Party games for a few months now, wanting to start them but not really wanting to go through all the nonsense of getting bad endings, reloading, making slightly different choices, getting a different bad ending and so forth.

Song of Saya, on the other hand, is both relatively short and only has two actual points where the player is asked to make any decision.  I will admit that this somewhat stretches the definition of “interactivity”, since the actual bulk of the gameplay consists solely of tapping the enter key and reading.

I strongly recommend headphones for this one, because the audio work is disturbingly effective at selling the narrative, which is about as bleak as you can get.  The main character is a bright young lad, a medical student, who was unfortunately in a car accident and whose life was only saved by an experimental and dreadfully risky neurosurgical procedure.

He’s alive, which is great, but he doesn’t see the world properly any more.  Everything is decayed and covered in gore, and people appear as gruesome shambling mounds who sound like they’re talking into one of those terribly annoying novelty voice changers.

For an extra twist of the knife, he’s smart enough to realize that the world hasn’t ACTUALLY changed into a heavy metal album cover, but he’s also painfully aware that letting on will earn him a trip directly to the nearest padded room.

The only thing providing any anchor to sanity is that there’s one person left who looks normal to him.  She just has a few… quirks.

This is not a game you want to play while idly snacking, because many of the visuals are designed to put you off the concept of, well, eating anything ever again, and the makers have thoughtfully provided a filter that blurs out the more grotesque scenery if you’d like, and a second filter that blurs it AND darkens it.

I went for the “let’s blur that stuff” option and feel no shame in having done so.  This is essentially TRIGGER WARNING: THE GAME.

My other warning is that you are very likely to wind up rooting for, well, bad things to happen to good people, just because the game makes you feel so sympathetic toward the bad guys in this particular scenario.

So with that aside, if you like a good horror story, I can’t help but recommend this one.