I am STAR OF FESTA 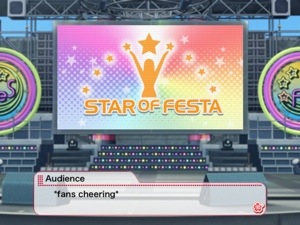 Finished the “campaign” mode, if you can call it that, of Idolmaster: Shiny Festa. The trick turned out to be compulsively grinding memories with my idols between actual days of competition, and equipping an item that let me be lazy with hold notes.

I recognize that none of that made sense to anyone who hasn’t played the game, so get on that already. If nothing else you will get the satisfaction of making people say, in incredulous tones, “you paid HOW MUCH for an iPad game?”

My next plan for lunch break gaming was to get back to Kingdom Hearts: DDD, but I took my 3dsxl out of my bag and realized that the thing is no game boy when it comes to holding a charge. I put it in there Monday, fully charged, and it was blinking red today.

By contrast, I have taken a GBASP out of storage after a couple of YEARS and had it cheerfully power up without fussing, so this is a little disappointing.

Guess I’ll work on getting some more song full combos instead.