When something happens only once, it’s possible that it’s a unique event.

When something happens more than once, it starts looking like a pattern.

That’s about as “deep” as I get in the morning.

At any rate, the pattern in this case seems to be: My wife suggests we go to an outlet mall. I grouse about the inconvenience, the crowds, the lack of parking, the sheer banality that the very concept of outlet malls embody. Eventually I break down and we go to the outlet mall, wherein somehow I wind up walking out with a shopping bag of my very own.

In this case, she wanted to go to the “LeSportsac” company store in Tulalip, WA. Since we also have a good friend who lives in Seattle, we had two reasons to drive up north (about 220 miles, each way, a bit rough for a day trip but doable)

I groused, I kvetched, I tried to get the “outlet mall” portion of the trip canceled in favor of spending more time hanging out in Seattle. I did not prevail.

The LeSportsac store was a scary place, but I have to admit that the prices there were only mildly insane as compared to the full-on-insane prices that Tokidoki products command at regular retail establishments. My wife wound up with two bags, and since I do not remember the names other than that they were italian sounding and started with a “C” and a “T” I will name them after pasta. If you are, like her, a twisted Tokidoki fan, you will know what I am trying to say when I say she bought a “Cannelloni” and an “Tortellini”, in “Paradiso” and “Inferno” respectively. If you are not, then the actual product names won’t matter and the only effect this should have on you is to possibly make you a little hungry.

I have an unfortunate attraction to the combination of “black” and “shiny” objects and as a result I have been lusting after a Movado watch since I first became aware of their existence. This is something of a sad comment on the effects of advertising on the weak masculine mind.

The downside of course is that, since the Movado people are apparently well aware of the effects of “black” and “shiny” on the weak masculine mind, they charge a bloody fortune for their watches. I am not going to say they’re overpriced or anything, because that’s a judgment call I don’t have the authority to make, but they’re well outside my price range.

On the other hand, when your wife takes you by the hand and drags you into the Movado company store at the same time as they’re having a 70% off sale on watches…

Look, even 30% of the regular price of one of these is 3 times as much as I’ve ever spent on a watch. Since I’ve bought one other watch in the last 15 years, that means that this one has to last me 45 years: 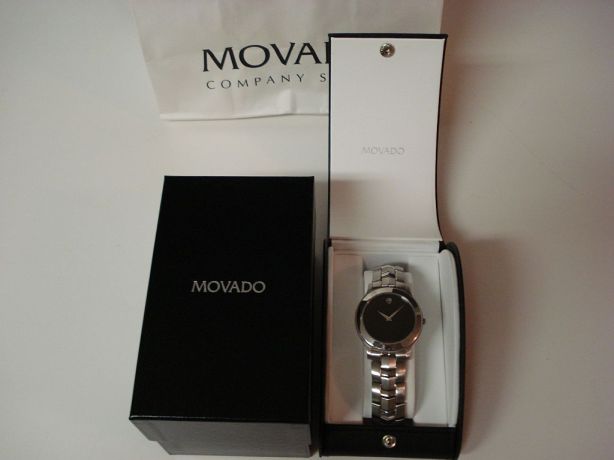 But it’s …black AND shiny…

After putting that on the Visa bill – and I’ve already logged on to my bank account and sent Visa the payment, first thing I did after having a nice cup of yogurt this morning – we finally drove back to Seattle to meet our friend and check out her new house, which is a really amazing 1920s era house that she’s turned into half living quarters for her / half a day care / preschool center. Both sides are really impressive – The amount of space she has gave us some serious apartment-dweller-envy and the school looked like the best parts of every kindergarten classroom carefully cut out and assembled into one space.

We hung out for a while, I did my best to break her computer in the name of being “helpful”, we went out for some rather nice sushi at “Blue C” sushi near UW, then we drove home, arrived at 2AM, and crashed in the manner of hard crashing things. Good times.