This is almost certainly a bad idea. 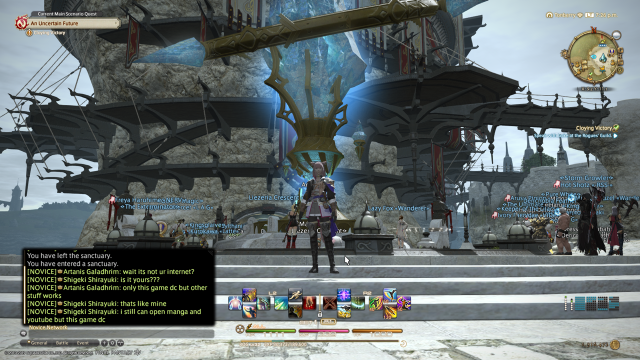 So yeah.  Square-Enix has sent me so many “PLEASE PLAY FINAL FANTASY FOURTEEN” emails that I finally broke down and reinstalled the thing.

I’ve been MMO-clean for a while now, and it’s been great as far as clearing out the mountain of backlog, but I’ve been hitting a brick wall recently where I will start a new game, get between 30 minutes and six hours in to it, and then realize that it is either hopelessly vapid or soul-crushingly depressing and that I don’t want to spend any more time wanting to throttle the characters or throw myself off a bridge.

So I was in the right frame of mind to get suckered in by a half-price sale on the recent FFXIV expansion and some free game time.

It’s important to note that FFXIV is an MMO designed to be played with a controller, and this is critical because my left hand has reached a point where it simply can’t hold a position over WASD for hours at a time without me starting to get micro tremors and numbness.  I’m going to be a gamepad peasant for the rest of my days, I’m afraid, but at least that isn’t a barrier to entry for this game.

That said, it has been nearly four years since the last time I played, so I have a character with a bunch of high-level jobs and absolutely no clue how to play any of them.  Obviously, I needed to start something new in order to have fewer buttons to press, and that has me playing a rogue for the first time in any MMO ever.  Normally I play tanks, or at least reasonably rugged DPS classes, and it’s taken some adjusting to the degree of squishiness I am currently “enjoying”.

…for the record, I’m not enjoying it.

What I am enjoying is the rogue story.  Every class in FFXIV comes with its own little storyline – nothing too crazy, just a few unique quests with cutscenes – and the rogue class quest is a generally enjoyable story of working occasionally-with and occasionally-against the city guard as you both try to stop a terrorist organization from killing the rightful leaders of the city.

It features the most adorable Lalafell ever, which is a hell of a high hurdle to clear.

Mind you, she’s the captain of the city guard and doesn’t understand why all of you rogues haven’t been arrested and thrown into very dark cells years ago, so the adorableness is exactly skin-deep.

This isn’t actually the first time I have reinstalled FFXIV in the last four years.  The other time was when they sent me a “play for free and oh would you like a maid outfit?” email, which I signed in for just long enough to claim.

Actually I may have some glasses in the bank.  I have a ridiculously-cluttered bank.  I don’t know what half the stuff in it does and I don’t know why I kept it in the first place, but theoretically it was important?

Anyway.  I have played for roughly a day, my rogue is level 32 and is looking at a quest that will let her become a ninja, and in general I’m looking at the death of my spare time from now until I decide that I’m just logging in every day to try to make the numbers bigger, which is the point where I traditionally stop playing MMOs and go outside to see whether there are still other people or whether the bombs finally dropped and it’s just me and the cockroaches.

2 Responses to This is almost certainly a bad idea.