The Old Man and Mercy

It’s mid-January and I am still playing Overwatch for between 30 and 60 minutes every night while making the pedals of our exercise bike go ’round.  As far as exercise routines go, it’s pretty low impact… but it does make me feel better about myself so I’m going to stick with it.

I mostly play in the “Quick Play” mode, which is no-expectations-low-stress gaming that fills up an experience bar that occasionally goes “Ding!” and spits out a box of random cosmetics for characters that I do not play.  The important thing is that I am filling a bar, and then it empties so I can fill it again.

A few months ago, I decided to dip into Overwatch’s “competitive play” mode for just long enough to run the 10 placement matches to receive a rank.  I did not have high expectations, so I was positively giddy when the game ranked me at 1530SR, which is just barely into silver and which meant that, even though I’m dealing with all of the assorted annoyances of getting older, there was still a rank below me.

You take the small victories where you find them.

Anyway, it’s a new season of competitive Overwatch and I figured I would run through the placement matches again now that I had been playing Mercy for about six weeks and thought I’d gotten at least a little better.

I did better on the matches!  The first time around, I went 3-and-7, but this time, WOO BOY WATCH OUT. 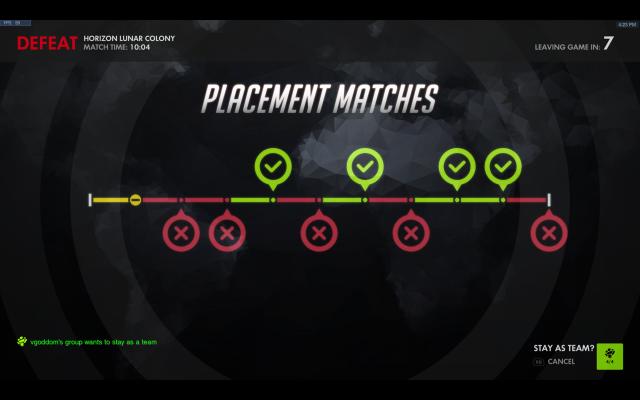 OK, not hugely better but surely better enough to place a little higher…

I like to say that I don’t have a competitive personality, but that’s not entirely true.  I am fiercely competitive when it comes to myself.  I want to be getting better at things, not worse, and this vexed me.

Some degree of reading Overwatch forums led me to a somewhat ego-salving explanation. According to the collective wisdom, placement matches are only really “placement matches” the very first time you run them.  After that, they’re basically just playing more competitive games at your current SR level, and it’s pretty common for people to drop a couple hundred points of ranking.

I liked this explanation a lot, but when I am being told something that I want to hear I always have a tendency to want to confirm it for myself.  Fortunately, I actually own Overwatch on the Xbox as well as the PC, thanks to the recent Winter sale, so in theory I could just run the placement matches there…

…except you need to be level 25.  And I was level 8.  And that was a grind that was going to be hard to do from the bike, even at an hour a night.

There were some highlights along the way, like this entirely implausible four-gold-medals match: 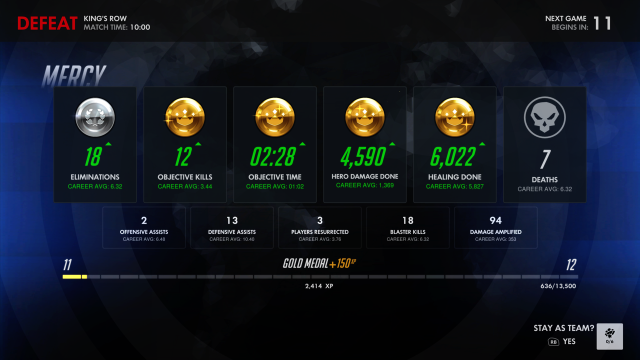 I’m sorry, is it wrong of me to be extra gleeful about getting the #1 spot for both damage output and heals?

And a ton of endorsements.  Not many people play support classes in quick play on the Xbox, so if you feel like farming endorsements I heartily recommend doing that:

I hit endorsement level 3 at level 24, by the way.

Oh, and I got an achievement that I hadn’t managed on the PC version of the game. 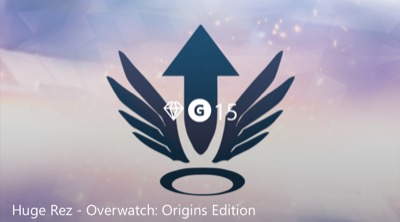 To get this, you need to resurrect six people in one match without dying.  I was in a match that was going just stunningly well and realized that I had rezzed four people already and there were like two minutes left and if I just derped a couple of heals here and there I could make sure that I had a couple of bodies lying around to resurrect…

I’m not a good person.

Still, eventually I hit level 25 and went happily off to the competitive play mode to see if I was REALLY a 1350SR Mercy.

My first match did not go well.  The matchmaking algorithm dropped me into a game against a nearly-full group of coordinated players, and they just steamrollered us all the way to the finish line, then did it again in reverse when it was our turn on attack.

The only notable result was that I got my first salty Xbox Live message in 17 years of owning an Xbox.

I mean, it wasn’t that salty.  There’s no references to my mother or anything.  Still, I got told to Git Gud by an internet stranger, and I feel like a Real Gamer(tm) now.

I’d be lying if I said that the next nine matches went TOO much better, but at least I didn’t drop below my baseline:

The end result, though? 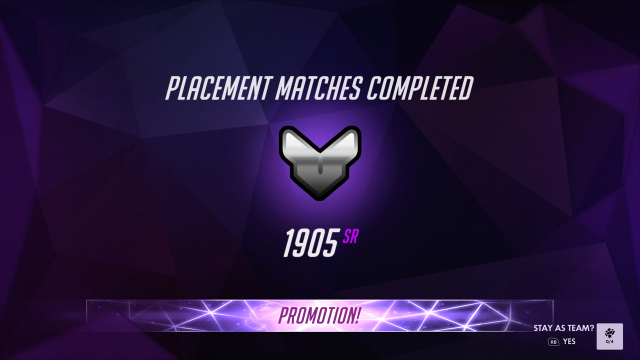 BAM, I say.  BAM.  No being condemned to bronze-level scrubdom for THIS guy, no sir.  That is a high-SILVER level of scrubdom.  Practically gold scrubdom.  I am completely vindicated.

Anyway, I guess the message here is that if you really want to get a… slightly more complimentary measurement of your skill at Overwatch, all you really need to do is… uh… buy a second copy of the game and then spend about twenty hours of your life grinding up to level 25 again and uh…

I may have played myself.

1 Response to The Old Man and Mercy