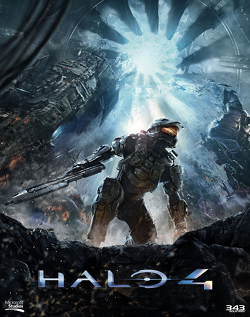 The real motivation behind this entire madness came from having played Halo 4 on the 360 a few years ago and having been completely lost during the whole thing.  It felt like there was an awful lot not being explained, and I am easily annoyed when I feel like things aren’t being explained.

Apparently, my reaction to being annoyed is to spend two weeks reading media tie-in novels and playing videogames.  I guess there are worse ways to vent frustration.

Anyway, short version: Halo 4 made a whole lot more sense this time, and I really liked it.  So, if for some reason you have come to this page wondering what you should do before playing Halo 4, let me recommend that you simply read The Fall of Reach, First Strike, Ghosts of Onyx, Glasslands, The Thursday War, Cryptum, Primordium, and Silentium, and play Halo 1, 2, and 3.  That will give you all the background you need to properly appreciate the Deep Lore of the game.

Needless to say, this is kind of nuts.  Yes, it’s reasonable to expect SOME degree of player familiarity when you’re shipping something with a “4” on the end, but at some point you may just need to admit to yourself that your universe is getting just a little full of itself.

Anyway.  Some thoughts on the most recently-consumed load of Halo media.

Apart from Halo Wars, which was a completely side thing, Halo: Reach was the least-necessary game in the series so far.  It’s basically the Star Wars: Rogue One of the series.  It also has a really uncomfortable control scheme if you’ve gotten used to the standard controls from the previous games, and it took me the first few levels before I stopped meleeing when I wanted to reload.  I didn’t hate it, I didn’t love it, it’s just kind of there.  I get the feeling it was released more as a multiplayer game than on the strength of its campaign, so I probably shouldn’t judge it.

The Forerunner trilogy is a bit slow to get moving and loves to throw science-fictiony-sounding words at the reader, expecting that you will eventually get them from context.  This vocabulary and the characters from the books do eventually show up in Halo 4, so these are kind of must-reads.  I really didn’t care for the middle book, but it starts and ends well.

Glasslands and The Thursday War, by contrast, were more up my alley – probably just because I’ve read enough novels starring these characters that I’m starting to get to know them.  They cover the ever-interesting question of what happens AFTER two sides aren’t technically shooting at each other anymore, with a focus on the Elites on the covenant side who have just realized that, thanks to thousands of years of being the military force for the covenant and having all their needs met, they don’t really know how to feed themselves or build stuff.  It’s a good premise.

Forward Unto Dawn is pretty solidly in the skippable column.  It’s a web series that serves as a back story to one of the UNSC characters who shows up in Halo 4, and there are two bits of dialogue in Halo 4 that don’t make much sense if you haven’t seen it. It also has some pretty good visuals and it’s only 90 minutes long so you might as well check it out before playing Halo 4.  You don’t absolutely need to, though.

After all of that, Halo 4 was a really enjoyable game.  I mean, I spent a lot of time repeating the checkpoint -> die -> try again -> and again -> make it to the next checkpoint -> die cycle, and I won’t deny that there were a couple of OH, COME ON NOW deaths.  It wasn’t nearly as bad as when I played it on the 360, where I eventually knocked the difficulty down to Easy because I kept running out of bullets before the game ran out of guys to throw at me.  I didn’t have that same problem this time, so I may have gotten SOMETHING out of playing nothing but Halo games for the last two weeks.

The new enemies are a nice change after so many games of Grunt Grunt Grunt Grunt Grunt Elite Brute Grunt Grunt Grunt GODDAMNED HUNTERS, and setting the whole thing on a Forerunner planet meant all kinds of new science-fictiony guns with Tronesque glowing lights all over them.  Two thumbs up, would shoot giant glowing rat… dog… salamander THINGS in the heads again.

After THAT, I thought about playing through the Spartan Ops campaign – 50 missions, all tuned around four-player co-op and all dry as toast – and elected to simply watch the story videos instead.  The Master Chief Collection, thoughtfully enough, makes all of the videos available with no pesky unlocking required, so that was a big win.  I don’t know how much of an impact they’ll have on the upcoming games, mind you, so I can’t judge whether they’re essential or skippable.

Next up! Halo: Spartan Assault, a mobile game that eventually got a PC release.  I originally bought it on my Windows Phone but couldn’t get on with the controls.  Fortunately, owning it on Windows Phone meant that I got a license for the PC version when it came out, so I don’t need to buy it again.  Let’s see how this goes, then.