Nights of Azure: A Girl and Her Demon Pals

I do a lot of playing games after the sequels have already been released, and Nights of Azure is no exception to this – it originally came out in March of 2016 and its sequel has been out for over a month, so talking about the original game now is pretty much the definition of Old News.

More embarrassingly, looking at my Amazon order history shows that I bought this in May of 2016.  At least it had already been marked down significantly by then and I got it for over half off retail, but still there’s a little shame there.

Leaving my lack of promptness aside, I think it’s best if I address the elephant in the room before moving forward.  This is a Gust game, and that means that it features cute characters in incredibly elaborate outfits showing a lot of skin and bouncing at the player.

And good morning to you, Lilysse.

Miss Arnice is the playable character, a half-demon fiend hunter cursed with the usual stuff – immortality, blood lust, being used as a cat bed…

There are also a couple of men to round out the cast, and they likewise get really neat outfits.

I’m not sure I could pull off the green, but damn that’s sharp.

I will never look this good.

Fashion aside, there’s a moderately depressing main story that involves a sealed demon king who can only be kept sealed away by periodic human sacrifice, and naturally your girlfriend – Lilysse, up top – has been chosen as this decade’s lamb for the altar.  Also naturally, you are not a big fan of the idea and set out to find a way to NOT have Lilysse throw herself to the figurative wolves, a task made somewhat more tricky by her frequently-stated firm desire to find the wolves and get throwing.

It’s not all doom and gloom, though, and it’s full of quirky little one-off plots, like discovering that Lilysse speaks cat.

Or a plot touching on the military potential of really bad cooking. 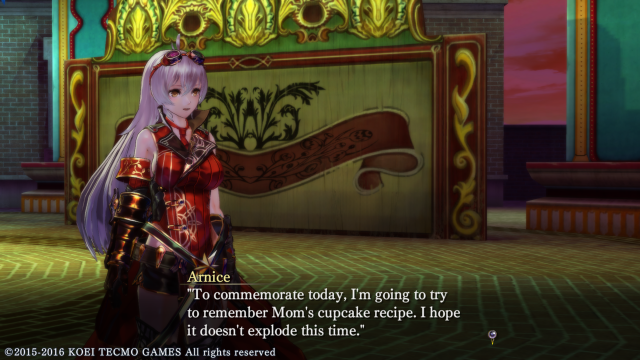 And a full-blooded demon who shows up occasionally to offer snark and advice.  She’s not entirely keen on the notion of the demon king getting off his leash, because she’s rather fond of human stuff and doesn’t want to see the world engulfed in endless night.

And hrrrrrrngh another cool outfit.

I’m starting to feel a little guilty about the number of screenshots, but this is really a game you play for the art style.  There’s a lot of running around dimly-lit mansions and subways and opera houses and fighting fiends of various sorts, but the combat never really clicked with me; there was a lack of weight to it that’s hard to define but left it fairly unsatisfying.  It doesn’t help, in that regard, that most of the actual work is done by a collection of NPC buddies that you accumulate and level up to fight with you – you can have up to four of them out on the field at any given time and they’re fairly competent at mopping up any opponents that aren’t part of a boss fight. 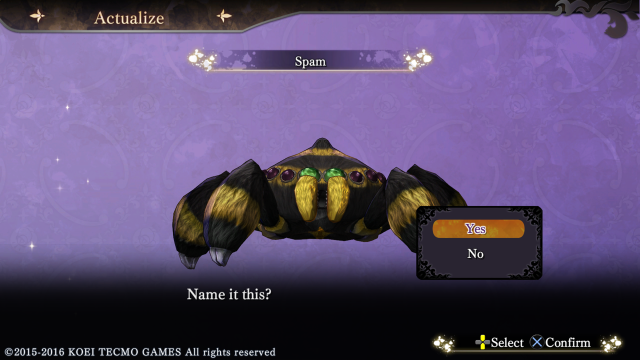 I didn’t choose this name.  Spam the Spider Fiend was a valuable companion.

On the negative side, I felt like the game had a few too many systems in it for a fairly short action/RPG title, and some of them hadn’t clicked with me by the time the credits rolled.  There’s a whole complicated system around leveling up and enhancing your squad of demons, and I didn’t really get it and missed out on seeing some things as a result.  There’s also a day/night cycle where you need to decide how you’re going to spend your days doing things like baking and shopping, which builds up skill points for your combat abilities, and a really out-of-place system where you hire trade ships to go to distant lands and bring you back stuff.

I just have a sense that there was a meeting where a guy named Phil (let’s ignore that this is a Japanese game and there probably was nobody named Phil) anyway, Phil stands up in a meeting and gives an impassioned speech about how the trade ship side events are Crucial To His Vision and the Heart Of Nights of Azure and he will walk Right Out That Door if they’re not left in, and everyone else sighs and the project manager writes a little note on his pad about “keep trade ships” and the QA team gets ready for another week of late nights making sure they work.

It seems to me that I have spent a lot of time griping, and that’s unfair. I did have a lot of fun once I’d finally figured out the systems and had a little plan where I’d do some horseback riding in the morning and follow that off with some gardening in the afternoon and that would give me the skill points to finally get the ability to equip another equipment slot and…

…look, once you get into it it’s kind of addictive.  It just took me a while to remember that I needed to set up my day planner for tomorrow every time I came back from an evening of fighting demonic creatures from the nether realms.

I mentioned that it was a fairly short game, and this is the case.  I spent a lot of time doing side quests and optional events and still hit ending credits about 20 hours in.  There are about half a dozen boss fights during the “build-up” part of the story, and they’re fast-paced affairs with all sorts of mid-fight power-ups and one particularly memorable boss who turns into a giant cannon and covers almost the entire arena in “stand here and die” as a last-gasp attack before dying himself. 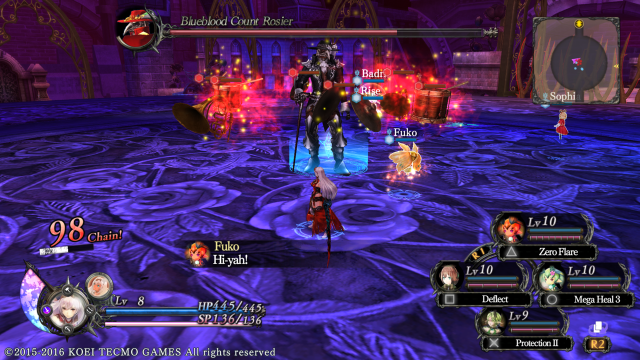 It makes the bit at the end where you need to fight them all again to unlock a Big Dang Door to get to the final boss really quite enjoyable, a pleasure rather than a slog.  It’s maybe a little lazy on the developer’s part but I didn’t at all mind paying them a second visit.

Speaking of the last boss – pardon the amateurish censorship work here, her name and dialog are huge spoilers – she’s yet another cute girl with yet another amazing outfit. 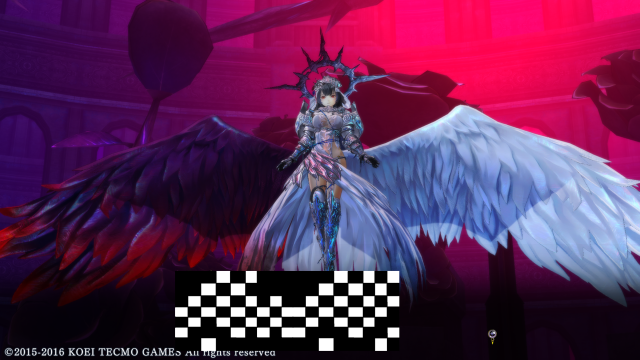 Looking at this again, I’m not sure where those wings attach.

She also represents the first actual challenge of the game, and it was a bit of a shock to actually LOSE to a boss fight.  Twice, even!  Let’s just say that she has one attack that you really want to learn the tell for, AND she heals to full multiple times over the course of the fight, which was a real “oh, COME ON” moment the first time I had her do it at me.

So, sum up, who should play this game? 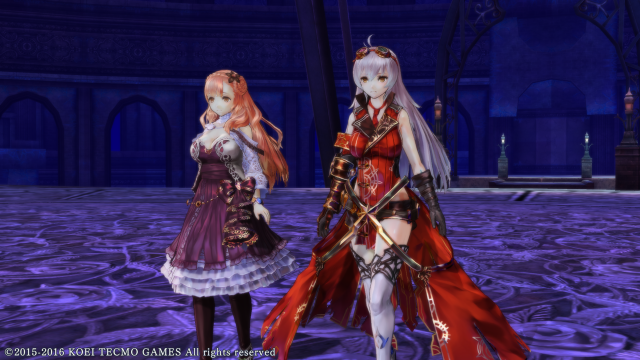 If you’re into cosplay, YES.  I don’t think real belts work like this, though.

If you like cute girls kicking demon butt and don’t mind occasional weird shifts in tone, also YES.  I’m not going to guarantee that you won’t often want to smack Lilysse when she has yet another attack of “welp, going to go die for the good of humanity now”, mind you.

If you want Souls-style slow tactical combat, or if you roll your eyes at heavily-pandering character designs, then NO.  This is a button masher and the main characters are here to appeal to the male gaze.

I figure I’ll get around to the sequel in 2019 or so.  I should probably buy it today so I’m ready for that.