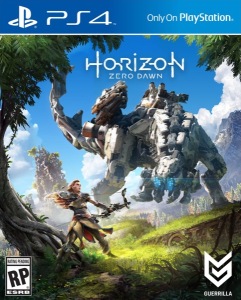 OK, let’s not beat around the bush.  It was pretty stunning, especially because I’m looking at what Guerrilla Games has done in the past and it’s not much more than a bunch of 7-to-10-hour-long linear manshooting games.  How they went from that to THIS is just crazy.

It took me a while to “get” open-world games – the whole business of having a main story quest HERE, and a bunch of side quests over HERE, and the freedom to more or less completely ignore the main story in favor of mucking about with the other stuff.  I didn’t really understand them until Skyrim, and then I lost a couple hundred hours to running around in it so maybe they’re not the most healthy things for me.

They’re probably better for me than MMOs anyway.

So, there’s been enough of a media blitz around H:ZD that I don’t think I need to say too much about it.  You have a bow and arrow and hunt giant robot dinosaurs in a distant, post-apocalyptic future.  There’s an ancient mystery to uncover and a current-day political intrigue plot that you wind up in the middle of, and the two fit together pretty well.

I only have a couple of things to say about it, because I admit that I was very curious as to whether they’d ever be addressed:

1) Yes, the game has kind of a weird name, but it IS explained in the course of the story.  It takes a while.  Actually the story in general doesn’t really kick in to gear for quite a while, but when it does kick in it’s, like, woah.  Woah.  WOAH.  I am having trouble articulating precisely how much woah there is, but it’s a lot of woah.

It’s also pretty easy to get one of these for your PSN trophy wall if you like hunting cheevos:

Seriously, the game has a huge number of random text logs and audio files and random videos to pick up, but getting the platinum does NOT require you to hunt them down.  It also doesn’t make you play the game on any super-hard difficulty settings or do things in just the right order to avoid missing trophies.  Really, just running around the world exploring had me having so many of the requirements checked off ALREADY that it barely felt like a chore to get the rest of them knocked out.

If you want to hunt giant robot T-rexes with a bow and arrow, and look damned good doing it, I cannot recommend this game highly enough – and if this does NOT sound like something that would interest you, I recommend checking whether you yourself might be a robot, because GIANT ROBOT T-REXES.

I do have the following dilemma now, however:  This came out a week before NieR: Automata, and I should be seriously keyed up to play that now, but  I’m not sure I can jump right into another big open-world game.  Maybe I should knock out a couple of trashy mahjong games or HOPAs first, something to give me a break from obsessively chasing map icons.