I’m not ever going to claim to be particularly athletic, but today was quite possibly the most immobile I’ve been in some while.  I split it between watching TV with my wife and playing through Saturn games that are old enough to buy their own liquor.

I realize that CD-ROMs don’t actually drink.  Work with me here.

D no Shokutaku, or just “D” in the US, was one of those super early all-FMV games that were going to replace all other forms of entertainment as we knew them.

It… didn’t happen that way.  In fact, we mostly got really awful barely-interactive games that (if we’re lucky) dropped most of their budget on hiring one actor you might recognize and who could actually act, or (more likely) didn’t have ANY actors you recognized.

D, by contrast, was an attempt to create a virtual actress, and its heroine did go on to show up in a couple of other games.  It still wasn’t GREAT, but it did have some style to it.  Back in the heady days just after the Playstation launched in North America, we rented this from the local blockbuster, and it made enough of an impression on me that I picked up a Saturn copy for Y50 a few years back.

Played nearly 22 years later, it’s… well, you can tell that they realized about halfway through that they simply didn’t have enough GAME to keep people busy, so they added a bizarre mechanism to slow the player down.  At one point, you go into a room with a wheel in the center of the room, and turning the wheel rotates the room.  The room only has one exit, so the other side of that exit changes every time you turn the wheel.

The exit you get is completely random, and there’s a couple of minutes of unskippable FMV associated with every time you turn the wheel and check which exit you’ve gotten.  So… it can take a while to exit this room going the right way.

Depressingly, the gentleman most responsible for D passed away at a very early age.  I would very much have liked to see what he could do with modern technology.

After D, I rather felt like switching gears, and a licensed horizontal shooter just happened to land in the disc tray.

This is the youngest of the games I played – it came out in 1997.  It’s basically a re-telling of the Macross movie, with occasional flying a Valkyrie around and shooting at things in between sequences from the movie.  (Like D, it has an awful lot of FMV.)

To give the tiniest bit of added value, there are three bits of new all-CG animation and a weird little insert story in the middle of the movie’s climactic space battle.

It was a decent shooter and made me want to rewatch the movie.  Not a ton to say there.  Weird difficulty curve where the first 8 levels are snoozeville, levels 9 and 10 are ones that you coast through until you slam headfirst into nasty end bosses, and then the 11th and final level is back to cruise-control mode.  Great use of depth – enemies are on basically three planes, with you on the middle plane, and shooting at anything on the other two planes involves using locking missiles so there are frequent missile barrages in classic Macross style.

Finally, a semi-naughty Mahjong game because it almost felt like sacrilege to be playing Saturn games for any length of time without revisiting the reason it infuriated the Japanese PTA back in the way back when.

I’m not familiar with the Doukyuusei series, though it has an impressive pedigree.  If Wikipedia is to be believed, the first entry (a PC-9801 game from 1992) is generally considered the first dating-sim.  It also spawned some sequels, ports, OVA and TV series, and… well, this, a mahjong game where you play against some of the characters.

I’d characterize it as a very introductory mahjong game and not a bad one to pick up if you wanted to learn how to play.  It doesn’t hold your hand to show you when you can meld or call tsumo or ron, but you can set the difficulty pretty low and the first four opponents (of six) are pretty much pushovers.

It also allows you to continue as many times as you want without losing progress, and you don’t need to bankrupt your opponents – you just need to get wins, even cheezy 1000 point barely-wins.

So, three Saturn games moved to the “beaten” pile and another couple moved to the “played for 20 minutes, enough to decide not to keep playing” pile.  Progress! 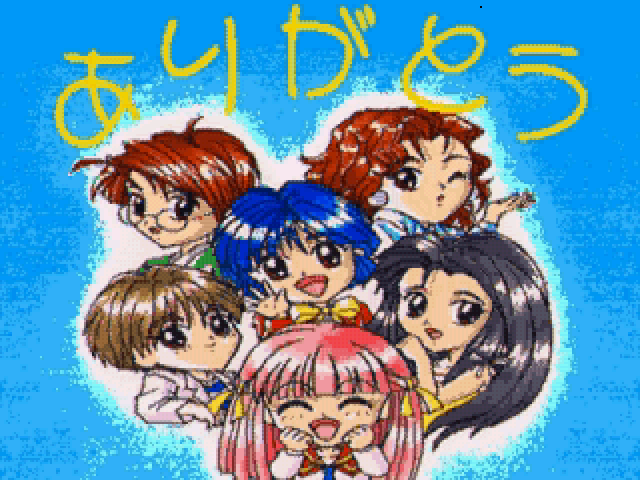