Posted on October 9, 2016 by baudattitude

For several years now, I’ve been using an Apple Cinema Display as my gaming PC monitor.  They’re insanely overpriced at retail, but you can get them from Apple’s refurb store for about 2/3rds of retail which makes them only, well, overpriced.

It’s a super shiny monitor.  Great screen, decent built-in speakers, a USB hub for convenience, and you can charge your Macbook off it should you have one.

It also has no hardware controls whatsoever, not even a power button.  Everything is done via software.

So when it stops working properly, it is BEYOND frustrating.  It just stopped turning on one day – well, it would sort of turn on in that the speakers and the USB ports would work, but the screen wouldn’t display an image.  If you unplugged it and plugged it back in a few times, eventually it would catch up to the idea that it was a monitor and you’d see your desktop, but after a while even that unplug / plug cycle stopped working.

I took it to the Apple store; they replaced a cable and gave it back to me.  I was aglow with the notion that I had resurrected this fantastic monitor for only about an $80 repair… and then, a couple of weeks later, it started doing the “will I turn on or won’t I?” game again.

So, I went to Best Buy for a replacement, and their monitor selection turned out to be pretty horrid.  Lots of 1080p 27″ monitors, which is way too low a resolution for that size of screen, a couple of ultra-wide-screen 2560×1080 monitors, one of them curved which tempted me briefly but which was almost getting back up in to the Apple-monitor-money range, and a couple of “4K” monitors.

Anyway, both of the 4K monitors were on sale, one being a hundred bucks less than the other, and both looked really nice, so I read reviews on them online, waffled a bit about the whole thing, and came home with the cheaper of them, the Samsung U28E590D.

I had some initial panic with it, because I have a GTX980 and was only getting 20fps in WoW, of all things, which is not exactly a system stress test.  It turned out that I needed to go into the monitor’s menu and change the refresh to “fastest” and turn on game mode, which got my fps up, and then I actually needed to install the monitor drivers in Windows and that got the colors looking right… and now it’s just a big pretty slab of a monitor. 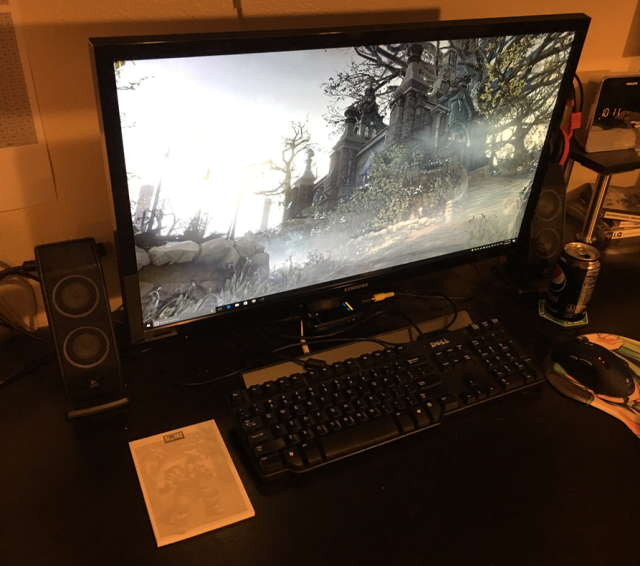 …really need to figure out what is messing with the white balance in my photos.  For reference, the wall is actually white, not that awful yellow.  But I digress.

One of the things you don’t get at the inexpensive end of the monitor scale is built-in speakers (and, as thin as this is, they would be awful even if they were there), but it does have an audio out.

So, I dragged it all out of the closet, and was trying to find room for the subwoofer / amplifier and the little wired remote control, and then I was thinking about it a little more closely and realized that I had bought a FiiO E07K a few years ago for listening to headphones at work and it was technically an amplifier… and it turns out that it is MORE than capable of driving a couple of desktop speakers all on its own.  So that was a bit of a win there.

Anyway, short version, it’s got some shortcomings and needs some initial tweaking, but I’m super happy with it so far.  In addition to WoW, I’ve tried Dark Souls III, Battlefront, and Rise of the Tomb Raider on the thing, and they all happily push out a ridiculous amount of pixels while still looking gorgeous.  I’m not seeing 60fps from ANYTHING at 4k, but I am not terribly sensitive to framerate as long as it stays above 30 – if you’re bothered by sub-60, you’re going to want a 1070/1080 or equivalent