What the heck is an “Estival”?

So, after a steady diet of From Software’s finest, I needed something a little more fluffy.  This took the form of two visual novels (Aozora Meikyuu and Sakura Beach 2), THREE hidden-object games (Enigmatis 2: The Mists of Ravenwood, Empress of the Deep and Dark Parables: The Curse of Briar Rose), and Senran Kagura: Estival Versus, the latest bouncy brawler from Marvelous.

I will not make excuses for having played, now, five separate entries in the Senran Kagura series.  I am a boy type human and these are made for boy type humans.

This is the first non-portable version of the series, and the jump to PS4 did some very good things for the game technically. Apart from the obvious jump from 960×544 to 1920×1080, the arenas are larger and have interesting hidden areas that you need to seek out in order to unlock the side story missions.  Your battles are still hemmed in by Mysterious Glowing Ninja Barriers, but there are plenty of places where the barrier doesn’t, for example, extend all the way to the rooftops and a little platforming will let you break out and explore.

Still, It didn’t turn out to be my favorite entry.  To be brutally honest, while it manages to rank higher than Senran Kagura 2: Crimson Burst, it came with a lot of issues that frustrated me, starting with the roster and the mission structure.

Estival Versus has 27 playable characters.  2 of them were added after launch, so they’re not part of the main story, leaving you with 25 characters to choose from.  Only, you can’t, not really.  All of the story missions have required characters for the first go-found, so you will wind up playing as each and every one of the characters, but never for long enough to get comfortable with any given one.  You can always go back and replay missions with the characters you actually LIKE, but that’s only on replays.

Also, while I realize that taste is highly subjective, I really disliked most of the characters they added for Estival Versus and was never particularly fond of the Gessen or Hebijo Academy squads from the Vita game to begin with.  This game is all about the Gessen girls,  three of the Hebijo members, and the new characters, leaving the main characters from the Hanzo and Homura squads to mostly sit around and warm benches waiting for their turns in the spotlight.

Side note: If I never have to slog through a mission with the candy-addled bucket girl Minori again, it will be too soon.

To end this particular rant, the story is a serious affair, all about coming to terms with the loss of loved ones and moving on, and it mixes very poorly with a game where the central mechanic is “hit your opponent hard enough to knock their clothes off”, so you have these long tearful speeches coming from characters whose modesty is currently being preserved only by a couple of lens flares.

Now, I haven’t started on the “Girl’s Heart” side missions, so those may be a little more tonally-consistent, but the main story just doesn’t really work, especially with the fan service turned up to, well, 11 seems low actually, so let’s just say that it’s well after the point where the knob should have stopped turning.  The goofy SD faces from earlier versions have been replaced with the aforementioned lens flares, the “defeat” poses are frequently crossing the line between “funny” and “humiliating”, and the new characters – who you play as or fight against far too often – come off as a little too much of lolicon bait.

…though they do get some good lines.

So now that I have griped about pretty much every aspect of the game, I guess I should point out some of the things I liked about it.

First, Asuka and Homura are probably my favorite frenemies in video games, so the few bits of story where they get to snipe at each other are great fun. The entire original cast gets some great moments, especially when they’re acknowledging just how weird their situations have become. 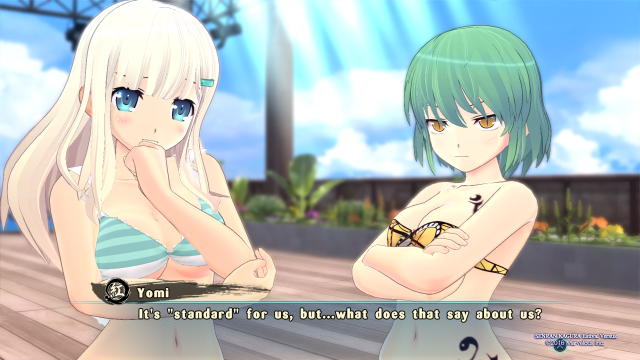 Most of the actual combat is very fluid and I loved seeing huge combo numbers rack up.  This did make it a LITTLE more obvious when I was playing one of the slower characters – Yozakura in particular needs you to cancel out of her four-hit combo before the final hit every time if you want to get any decent numbers, but playing with the speedy characters had the pinball-of-doom feeling that I very much enjoy.

And, as previously mentioned, escaping from the small screen made things look REALLY good.

I’m still going to play through the side missions and try to mop up the last of the trophies, but future entries in the series have slipped out of the “preorder” category and into “wait and see”.