Bro, Do You Even BlueBro?

So, there are a couple of different Covenants in Dark Souls III that revolve around helping other people.  The Warriors of Sunlight (“SunBros”), as previously mentioned, hang out near boss fights to lend a hand if needed.  I started off as a SunBro and have gotten enough of the covenant rewards so that I’ll be able to get max rank in the covenant as soon as I find the dang altar to hand them all in at.

Then I met an NPC who inducted me into the Blue Sentinels.  This is a Covenant where, once you’ve joined it, you will be occasionally plucked out of whatever you’re doing and plopped down in another player’s game for the purpose of defending them from a PvP invasion.  You are a bright blue phantom while in the other player’s game, hence “BlueBro”.

I’m not actually very good at PvP, and I can’t say that I was ever a GREAT help to any of the people whose games I got summoned into, but I like to hope that I was at least a helpful distraction at times.

If I’m honest… it did wear after a while.  Once the novelty wore off it actually got to be a little jarring constantly being yanked out of my own game and dropped into whichever area I was needed in.  Still, I stuck with it for long enough – and was present for enough successful defenses – to get the top rank in that covenant as well. 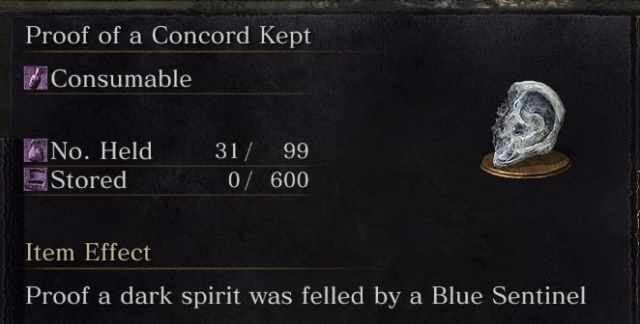 Ironically, neither covenant gives me any real game benefits.  Their top-rank rewards are Miracles, which are Dark Souls’ faith-based spells, and I’m playing an all-Int sorcerer.  Still, sense of satisfaction and accomplishment and all that.

4 Responses to Bro, Do You Even BlueBro?