Bro, Do You Even SunBro?

I promise I won’t go too wacky with the Dark Souls III posts.  What’s far more likely, to be honest, is that I forget entirely about updating this thing.

But for now, here’s one more.

There aren’t a ton of sympathetic and likable characters anywhere in the Souls universe, but I think that Solaire, the Knight of Sunlight you first meet in the Undead Burg early in the first Dark Souls, is most everyone’s favorite.  In a world where being undead but not insane YET is pretty much the best you can say for anyone, he is terrifically optimistic and helps you out during some of the game’s worst boss fights.

I felt just awful when I failed to save him in the end.

I joined the Heirs of the Sun covenant in Dark Souls II, but did it pretty late in the game and never managed to get enough co-op fights in to actually rank up in the covenant.  I rather felt like I’d let the jolly madman down a second time.

So, in Dark Souls III, when I realized that I could join the Warriors of Sunlight covenant super early – just after beating the game’s first boss, in fact – I got my very own gilt-edged membership card and went right back to the first boss to lay my summon sign down.

What followed was, mmm, about four hours of helping with the boss, and occasionally helping fend off PvP invasions, and far far FAR too many instances where I’d get summoned to help and watch the host rush up the stairs to tackle the Dancer boss (and die, every single time), and EVENTUALLY… 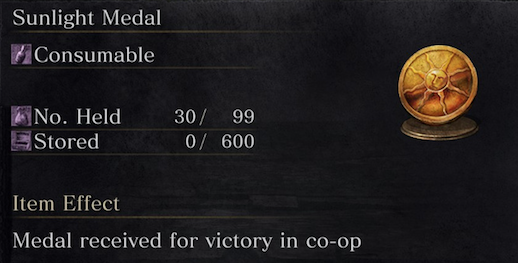 The crazy thing, of course, is that I’m not even close to the actual altar where I turn these dang things in.  But, once I get there, I am going to hand these things in with pride.  For Solaire’s sake.

Oh, and I also wound up with about 50000 souls and 40 embers, 25 of which I turned into more souls.  Net result, 10 levels, all spent on INT and now my Soul Arrow is extra punchy.  Next, I need to find an int-scaling weapon, and fast.