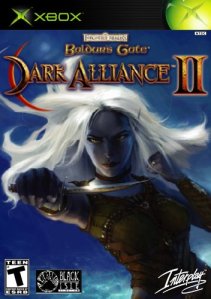 Earlier this year, I finished off nearly every Xbox and Xbox 360 game I had, leaving only Baldur’s Gate: Dark Alliance 2.  My wife and I had played through the first one in co-op mode, so I gave her a few months to decide whether she was in the mood for the sequel, then finally broke down and gave it a spin solo.  The first one had ended with a particularly vicious cliffhanger, and I wanted to know how things had turned out.

There are five classes to choose from, and I chose the Cleric because I always like playing clerics in D&D campaigns.  Then, I spent the course of the campaign putting all of my specialization points into stuff that would make me a really hard to kill cleric, and spent all of my money likewise, focusing on armor, a really good shield, and a pretty solid mace.

This worked great for 99% of the game.  There were several bosses that I saw four or five times before I managed to beat them, and I had to get used to trying out new strategies, but I got a nice sense of satisfaction every time one of them bit the dust.

Then I got to the final boss, and got very annoyed.

The last boss does a lot of things to try to kill you – he puts status effects on you, he stabs you a lot, he harasses you with clouds of bats (did I mention he’s a vampire?), and generally he puts out a good bit of damage.

That is not the problem.

The problem is, he can drain life from the player AND he can summon a shadow copy of himself that will heal him unless it’s killed quickly enough.

I had specialized in, and spent every gold piece on, survivability, and this was – fundamentally – a DPS check, in a single-player game.

I tested this, by turning on the game’s invulnerability cheat, and just beating on the guy, ignoring blocking and healing and all of those other time wasters.

I still couldn’t outdamage his healing.  Tried for a good twenty minutes.  Got sorta close at one point where he got far enough from his shadow copy that the shadow stopped healing him, but then he started chain draining me – yes, through invulnerability – and got back up to full health.

I did some reading online, and the consensus boiled down to “choose the necromancer or barbarian at the beginning, or play with a partner, or play on Easy”

To heck with that.

My workaround was to load my last save, go to the vendor, sell every piece of armor I had on, craft myself a huge and nasty two-handed sword, go BACK to the boss fight, turn on invulnerability to make up for being naked, and then beat the stuffing out of him.

It wasn’t even a close fight.  I didn’t even bother with killing the shadow; he couldn’t out-heal me.

I’m marking this off the backlog as “beaten” without a shred of guilt.

Oh, and naturally, the reward for the whole thing was a short cutscene that ended with yet another cliffhanger.  It’s been twelve years without a Dark Alliance 3; I don’t think it’s happening.