Posted on December 3, 2015 by baudattitude 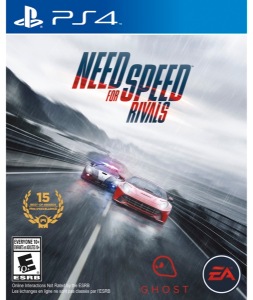 I don’t play many driving games. Honestly, barring “Team Sports”, I’m hard-pressed to think of a genre that I play less.

I did have a blast with Flatout: Ultimate Carnage, which I bought solely on the strength of a friend’s recommendation. It was more destruction derby than traditional racing, with some wonky physics and a TERRIBLE licensed soundtrack, and I played it until I’d finished the single-player campaign and then went back to hunt down a few trophies.

I also played Need for Speed: Carbon, because it let me go drifting in a virtual version of the same car I drive on a daily basis, and even got all the way to the final race. I then got my doors completely blown off – it wasn’t even close – and put it aside.

What I’m trying to get at, here, is that there’s absolutely no way I would have ever picked up Need for Speed: Rivals on my own.

Fortunately, it wasn’t my call. My wife decided it would make a good Christmas present.

Turns out, she was 100% correct on this. Before I go on, a caution: I do talk about plot elements below, so, you know, spoilers etc.

While “racing” games aren’t exactly in my wheelhouse – no apologies – NFS:Rivals includes a campaign wherein you play as a cop ON THE EDGE, completely dedicated to busting illegal street racers at any cost.

For example, while you are driving around, you may spot a pesky scofflaw violating the speed limit.

Before giving chase, and hopefully turning their car into a pile of scrap from which the driver can be dragged and arrested, you must signal your intention to do so. This switches you from “Patrol” mode to “Pursuit” mode, and you have a pair of ways in which it can be accomplished.

First, you can pull up behind them and turn on your lights and siren. At this point, they will run, and your dispatcher will cheerfully authorize you to give chase.

Alternately, you can pull up behind them, punch the boost button, ram their back bumper at full speed, then radio your dispatcher and report that the suspect collided with you and that you are naturally giving chase in response to this naked act of unsolicited aggression.

As you might expect, this sort of behavior draws some attention to your police department, and the FBI sends in a task force to investigate reports of rogue cops, relegating you and your fellow officers to desk duties.

So, you steal a sports car from the impound lot and start running people off the road until the FBI decides that, yes, street racers ARE a problem and re-instates you to deal with them.

Right now, I’m starting the 7th chapter (of 10), and I’m still not sure whether it’s an elaborately-crafted parody or a 100% earnest defense of the ends justifying the means.

There are things you can do that don’t involve crashing into ruffians, of course, and there’s even a campaign where you play as one of the racers, if that’s your thing.

My only complaints about the game are (1) loading times are a little extreme and (2) EA is really pushing the whole always-online thing, so by default you are dropped into a map with five other people. It took me a while to find out where I could turn this off, and apparently you won’t be ABLE to turn it off in the next NFS game, which is a bit of a downer.