Posted on August 4, 2015 by baudattitude 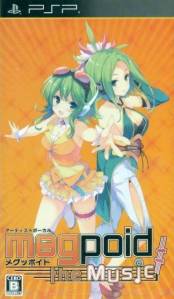 After knocking the K-On! rhythm game out of the backlog last week, I went back to the PSP shelf, picked up Megpoid The Music#, booted it for long enough to do the data install, and stuck it in my bag to play during my lunch breaks at work.

After a few minutes playing, I made a major assumption.  It turned out to be very wrong, but more on that in a moment.

It felt very much like a quick-and-dirty Project Diva knock-off, and I figured that it had been pushed out the door in late 2009 to cash in on the Miku craze.  From that perspective, I was willing to forgive it some of its faults – like a constant barrage of “now loading” screens, a lack of auto-save, a painful “hitch” when changing outfits, and songs that are embarrassingly short – we’re talking less than two minutes in many cases.

(The songs are good, mind you – there are some very catchy tunes on this disc.  They’re just very, very short)

Then, having made this initial assumption, I looked the game up online, because I was curious who the main character was.

That was… a eye opener.

It turns out that this actually came out in 2013 – and, from that perspective, it’s really hard to look at it too charitably.  It STILL feels like a quick-and-dirty Project Diva knockoff, or maybe just a promotional tool to boost the popularity of the Megpoid Vocaloid production software, but it’s a promotional tool that they had the nerve to charge Y5800 for.

(There was also a collector’s edition, which came with a figure.  It originally retailed for Y9698.   If you’d like a copy, Amazon Japan has new copies in stock, priced to move at Y2800.)

For extra weird factor, this isn’t available on the PSN store – so either it was a UMD-only release in 2013, or it got pulled down at some point.   If you could play it on a Vita, it might at least help with the loading times, but it looks like that just isn’t an option.

I still have one more rhythm game to play from my 2014 used-game-shopping binge, and that one will have me breaking out my 9-year old Coral Pink Nintendo DS Lite, just for old time’s sake.  Kind of looking forward to it, to be honest – the Vita and 3DSXL are phenomenal game systems, but the PSP and DS Lite NAILED the “portable” aspect of the portable game system.