I have a difficult time thinking of a group of gamers more easily abused than Sega Saturn fans. The system had a painfully early demise in the US and was by virtually every measure an abject failure, but the slightest hint of a sequel, real or “spiritual” to any of its many cult classics has us lining up for another chance to spend money at trying to recapture the old Sega magic.

Buying Crimson Dragon: Side Story didn’t involve too much money, but I was rather disconcerted when I launched the thing for the first time and it started talking about the jewels that I would need to acquire in order to unlock skills for my dragon or continue upon a defeat.

I confess that I thought unkind thoughts at this precise moment.

These jewels are, naturally, sold on the Xbox Live Marketplace.  Or were.  They’re priced in Microsoft Points rather than real money, so you can’t actually buy them now.

Fortunately, you can get jewels through finishing game levels – though at a miserly pace – or by simply moving from spot to spot. The game keeps track of every location you’ve played it in and awards jewels based on distance traveled.

Since I started the game for the first time as the high-speed train I was in pulled away from Beijing, destination Shanghai, I picked up quite a few of these jewels in very short order.

I needn’t have worried overmuch, as it turns out, because I didn’t actually wind up using any skills that cost gems to buy in the course of beating the Story mode.  They seem blissfully optional, though you will need them for certain achievements.

While, for whatever reason, the game avoids using the Panzer Dragoon name, it’s very much a scaled-down version of the series, with all of the haunting music, desolate-yet-beautiful landscapes and subtly depressing story that you’d expect from one.

I will not apologize for using “scaled-down” to describe a game about a dragon.

So there’s also a game bit in there. This is also classic Panzer Dragoon, with appropriately huge bosses and lock-on targeting. There are some different weapon styles as well, and I was quite fond of a weapon that just has your dragon constantly shooting big yellow energy balls. It allowed me to see more of the screen than other weapons, which required me to use one thumb to move the dragon and another hand to target things you didn’t want to be in front of you anymore. 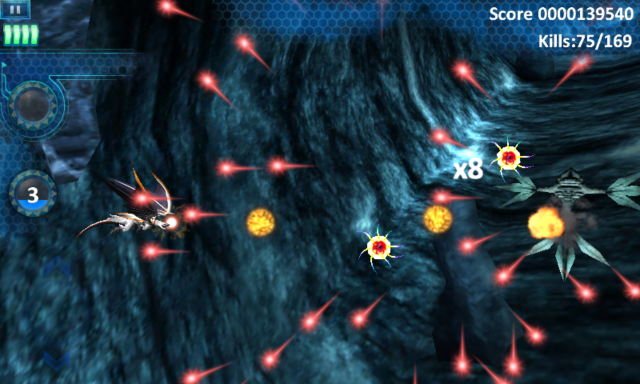 As you finish stages – win or lose – you gain experience for your dragon, which translates into stronger weapons, more health, etc.  You can also  drop back to earlier levels to grind a bit should you find yourself stymied by a particular boss, and I was very grateful for this when I got well-and-truly stymied by the stage four end boss.

Stage four turned out to be the penultimate stage.  Stage FIVE is just a straight boss fight and I managed to one-shot it after all the grinding I did to clear stage four.

After clearing the five story mode levels, there are 25 missions, all of which just rehash the five levels you’ve already played in various orders and with tweaked difficulty levels. Normally I’d leave that bit of a game alone, but I was stuck on a train with not much to do, so I had a good time clearing out some of those missions.

It was a pretty good use of 99 cents, and if you have a Windows Phone I’d say go for it.

The only thing I’ll point out as an nonredeemable flaw is that, if you are an achievement completionist, this game will likely drive you to drink. One of the achievements requires beating the final boss 200 times, and even though it’s something you can do in 3 minutes or so, I can’t fathom spending 10 hours replaying the same level over and over just to pump up my gamerscore by another few points. Another two require you to have unlocked every unlockable skill, and some of those are gated behind having Xbox live friends who a) have a Windows phone to play the game on and b) are kind enough to play it and submit leaderboard scores.  You also need jewels to unlock the skills, so you may be sunk here even if you DO have friends with the game.

If you’re comfortable with getting about half of the available 200 gamerscore, that’s something that I was able to knock out in four or five hours, so anyone who’s actually any good could likely do it a lot quicker.