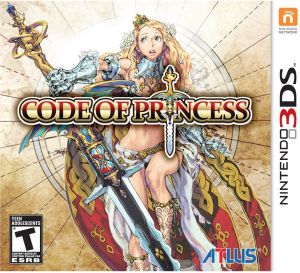 I’ve had a 3DS for a few months now, and it’s seen frighteningly little use playing actual 3DS software. It does make a fabulous regular DS – but, since I already had one of those, that’s scarce justification to have bought the new system.

It’s not my fault that the Vita is my portable system of choice – it’s a fantastic piece of kit and is positively flooded with games that fit into my wheelhouse, as it were, and the 3DS has an unfortunate lack of non-first-party titles to earn it a place in my go bag.

So, knowing that I’d be in China for two weeks, I made the conscious decision to leave the Vita home. Instead, I packed my pretty princess pink 3DS, with DoA Dimensions, Kingdom Hearts and Code of Princess on carts and Senran Kagura, Liberation Maiden, and Demon King Box on the SD card. I had to leave my only other retail title, Spirit Camera, at home as it relies on AR cards.

I wound up playing through two of these.

I was under the impression that Code of Princess was a 6-hour-or-less game, so that’s where I started.

It turned out to be a four hour and eight minutes game, so it really WAS a good place to start. It also turned out to be playable on a single 3DS charge – the power LED went red during the final boss fight and the battery held out through the closing credits like a champ.

There’s not much to say to the plot. There’s a peaceful kingdom, it gets attacked by monsters, there’s an evil queen behind it all, it falls to you to strap on your bikini armor and pick up your massively oversized sword and save the world. Along the way, you wind up with a big group of followers.

It does get some points in my book for having a genuinely likeable cast of characters and some good banter during the cutscenes. Sadly, there’s no Japanese language option, but you can mute the voice track to achieve a result that’s almost as good.

Even with it being a terrifically short game, I didn’t feel as though I’d been cheated in buying it. Part of that is probably because it was twelve bucks new on Amazon, of course, but it also felt like a complete experience. The main character (you can play as any of four different, but I stuck with the princess character) is kind of slow moving and her attacks have a lot of vulnerable frames to them. You can’t hope to win if you are constantly on the offense, so I found myself in the odd position of needing to learn how to block and dodge, rather than just mashing the A button to victory. The game is divided up into a bunch of missions – and you can go back and replay any of the earlier missions at any time – and they do a very good job of forcing you to learn the mechanics. The final boss fight, in addition to being the story climax, is really a final exam testing whether you’ve been paying attention up to that point. They certainly could have padded it out some more, but that’s where you have the option to play through the game as one of the other characters, I suppose.

So, overall, a nice use of a few hours of an international flight and a general thumbs up from me.