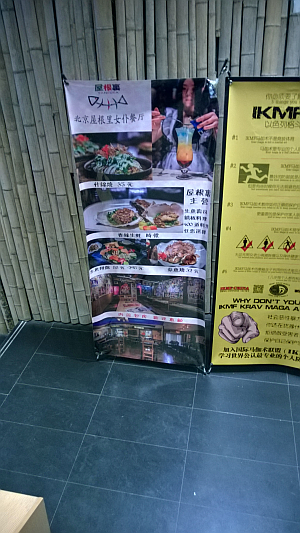 I’m not going to claim that I’m any sort of Maid café expert, but I’ve been to a couple in Tokyo and one in Osaka, and my opinion is that they’re generally nice places to go if you’re in the mood for some light pampering and heavy pandering and a generally relaxing atmosphere. The ones I’ve been to have all been in the hearts of otaku shopping districts, and a few hours shopping in any of those will put anyone in the mood for a comfy chair and some classical music and an overpriced omelet with a heart drawn on it.

So, when I heard that Beijing had a maid café of its own, I had to go and check it out. This was a bit of an adventure, because the directions I had were not entirely complete and I don’t really understand Chinese addresses and the building it had been in was completely gutted when I DID find it and then it took me a while to find it at its new location. 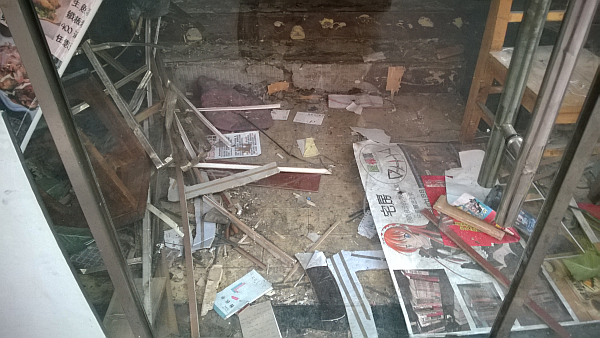 The lobby of the former location.  There was, at least, a map pointing me to the new restaurant.

Not that any of that is their fault, and walking that much DID get me really ready to eat something, so I was glad to finally find the place.

I got the sense something was wrong when I entered and was greeted with a half-hearted “okaeri nasai” rather than “okaeri nasai, goshuujinsama”.  I don’t need THAT much pandering but it was a little jarring.

Leaving that aside, it wasn’t a great experience.

To start with, their front room had 8 tables set up for anywhere between 2 and 6 people. One of these tables was occupied. That left seven empty tables and they still seated me at the bar so I’d have my back to the room. Any attempt to look at the decor or, to be honest, watch the staff at work meant twisting around and staring.

The first menu they handed me was bilingual in Chinese and Japanese. I tried ordering in Japanese, and I got a blank look and a trilingual picture menu (English/Japanese/Chinese) and it was made clear that ordering should be done through gesture.

Yaneura is a little atypical in that it’s actually an izakaya rather than just a café, so it has a pretty full menu. I still ordered the omelet rice, which should be the symbol, in any maid-themed establishment, that Mr. Customer is in the mood to have something goofy drawn on his food. Usually, this is a heart, but I’ve seen some more creative stuff from time to time.

Mine came with sauce, but no art.

I also got a coke, which was delivered in the form of a 330ml can of coke and an iceless glass, plunked down with all the coquettishness of a drive-by shooting by whoever had drawn the “serve the foreigner” short straw.

Again, this is Maid Café 101 stuff here. You open the can for the customer, you pour it in the glass. If you’re looking for advanced marks you get them a bendy straw and stick it on in there.

About the only thing they got right, really, was to have five servers on duty in maid outfits, and the outfits were suitably frilly. There were also some anime tchotchkes stuck on shelves around the main dining area, so I guess they worked on the décor and uniform parts and called it good.

I went looking for the bathroom, and there were signs pointing me downstairs, and this was where stuff started to go a little Douglas Adams because the bathroom was in a basement that looked to have been ripped apart for remodeling and left that way, with lots of building materials lying around and virtually no illumination. The men’s room had two stalls; one had a chef’s apron draped over the door from the inside and cigarette smoke wafting over the door, the other was an Asian-style floor toilet that had been prodigiously used and not flushed.

Being faced with a massive pile of the last guy’s business just put a fine cap on the experience.

I’m trying to envision a scenario where I could put a happier face on this place. I guess if you speak Chinese, or are with someone who does, and you came in with at least a group of four, and you’d never ever ever been to a maid-themed establishment before so you had really low expectations it might be OK.

Oh, and maybe they’ll finish the basement one of these days too.