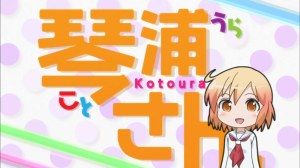 After finishing Gatchaman Crowds, I needed a new show.

Browsing Crunchyroll, I stumbled across Kotoura-San, a 12-episode “fantasy romantic comedy” featuring a girl who reads minds and a small cast of wacky high school friends, which sounded right up my alley.

After watching it, I can confirm that it is 11 and a half episodes of wacky (I might even say ZANY, if pressed) high school antics with some light drama.

On the other hand, the first half-episode is some of the most depressing stuff I’ve seen.  Not QUITE Majika Madoka-grade angst, but watching Kotoura’s unconscious mind-reading drive off her friends and break up her family – before her parents just up and abandon her – was a very rough 10 minutes to get through.  There’s a reason that this is a headliner on the tvtropes “Break the Cutie” page.

This leads directly into a sugary-sweet energetic OP, which has rather the effect of shifting mental gears without using the clutch.

On the… third? hand, it makes her recovery over the rest of the show really enjoyable and it has a very satisfying happy ending.  So there’s that.

So uh, recommended if you like light goofy romantic high school psychic comedies and can get through 10 minutes of an adorable character being put through hell.