…but Miku ain’t one. 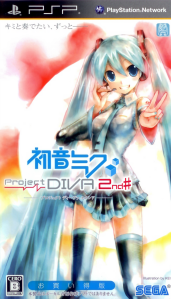 Kingdom Hearts isn’t the sort of game you can play on your lunch breaks, so I’ve been bringing my PSP and Project Diva 2nd# to work to fill out the middle of the day.  I was a little nervous about doing this, to be honest, because the first game was one of the most horribly addictive things I’ve ever played.

It turns out that I was right to be nervous, because it’s just as good as the original game at reaching its tentacles into the part of your brain that makes you go back for “just one more song”.

The game is, well, it’s a rhythm game.  You watch music videos, little targets in the shape of the PSP face buttons pop up on the screen, matching symbols fly across the screen at the targets, you push buttons more or less in time with the music and hopefully you are pushing the correct button at the time the symbol hits its target.  Project Diva 2nd# adds a couple of new mechanics – there are some notes where you have to push a button AND the d-pad at the same time, and there are some notes where you need to push and hold a button for an extended note.  Neither of these is especially tricky to get the hang of, but they do add some complexity.

What can be tricky is tuning out the music video that’s playing in the background, because there are places where it seems calculated to draw your eyes away from the marker that you’re supposed to be hitting.

In the first game, the grade you received upon passing a stage was entirely based on your score, and the score was heavily influenced by the number of notes you could chain in a row.  This meant that was quite possible to miss a comparatively small number of notes over the course of a song and be penalized much more harshly than if you missed the same number of notes over a short period.  When I was trying to unlock the last couple of outfits, this lead to quite a few rage restarts brought on by having a derpy moment or two halfway through a song.

Your numerical score for a stage in 2nd# is still chain-based, but your grade for a stage is now based on the raw number of notes you hit.  This means that recovering from a derpy moment is just a matter of accepting that you’ve made a mistake, getting refocused and hitting that next note.  There’s no need to start over and there’s no time really to dwell on having messed up.  This is a rather positive life philosophy, come to think of it.

There are a bunch of new features that I haven’t looked at too closely.  Apparently you can do custom songs now, and there’s some DLC that I won’t ever be able to download from the Japanese PSN, but setting those aside still leaves you with a game that’s pretty much the same as the last one, just with some new songs and with a couple new mechanics.

The perfect second helping, in my opinion.