A few days ago, I made the mistake of mentioning how the control scheme for the new Yar’s Revenge reminded me of Gunvalkyrie, Smilebit’s 2002 3rd-person shooter and hidden-object game.

Well, technically, the only part of the game that’s a hidden object game is the cover art, reproduced here for your brief puzzlement.  US on left, Japan on right: 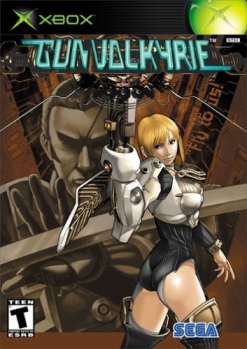 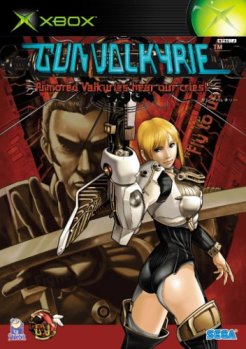 Did you see that there’s actually a guy on the cover?  It took me a while, too.  There’s no shame.

Anyway, I originally bought Gunvalkyrie back in April of 2007.  That’s five years ago, now, come to think of it.  I really am not good about getting right to games.

Back then, I played a little bit of it and felt like there was a decent game in there, unfortunately hidden behind a control scheme that was a bit dense, but it fell off my radar pretty quickly.

After reminding myself of it last week, I was inspired to give it another go.

Now that I’ve dug it out of the box that all non-360-compatible Xbox games had been stuck in, managed to coax our old Xbox back into service, and put the last three days into seeing what I could do about that control scheme, I can verify that there actually is quite a decent game in there, partly because it draws you in with a bizarre plot centered around Great Britain conquering the world and seeding the galaxy with colonies (in the late 19th century, mind you) and partly BECAUSE the control scheme is so bizarre compared to other 3rd-person games.

Take, if you will, the Assassin’s Creed games.  They use a pretty bog-standard control scheme which isn’t difficult to pick up.  Run around with the left stick, steer with the right stick, and it has a single button that puts you into Awesome Assassin Mode, where you hold down the button and run forward and your on-screen character does Amazing Parkour Stunts and you get a vague sense of smugness at how awesome you are.

Gunvalkyrie is as far from that familiar and accessible control scheme as you can get.

Your character IS capable of pulling off some terribly impressive aerobatics, but actually getting them done is left in your hands and depends entirely upon you learning a set of controls that are… well, not BAD controls, just terribly, terribly unique and entirely non-configurable (you can’t even invert the view axis!).  It makes constant use of the stick buttons, the “L3” and “R3” buttons as it were, and the result is that you are pressing DOWN on the pad at the same time as moving the pad most of the time.  The sound of the controller during a heated boss fight is, well, remarkably similar to the sound of a Guitar Hero controller being used to play a particularly heated solo.

The result of this is that, once you start getting the hang of using the thumbsticks in ways that no game before or since has asked you to, there’s a tremendous sense of satisfaction.  The game has a meter on screen which slowly counts up as you perform more and more mid-air stunts in hazardous conditions (you must be near an enemy for it to count up) without actually being hit or touching the ground, and when the meter fills you turn into a Massive Badass for the next 10 seconds, invulnerable to incoming damage and with your weapons turned up to 11.

I am not, by and large, a fan of “hard” games.  I like running through games as, well, a bit of a tourist to be honest.  I’m the reason they PUT “easy” settings on games, and I am also the reason why developers like Smilebit DON’T add a difficulty setting – they don’t want tourists to finish their games!

Every single person playing this game has to face the same challenges in the same way. The result is that, once you get the control scheme down, once you suffer through the platforming HELL that is the Naglfar’s Pit level and put the requisite hours in to figure out how to beat the bizarre bat-winged-cherub last boss, you are in a very small crowd of gamers who have done the same, and it feels good to be there.

I’m so stoked, in fact, that I am going to dig out my copy of Ninja Gaiden and…