In which I try an F2P MMORPG

Posted on August 2, 2011 by baudattitude

I don’t think it’s any shocker to anyone that my formative years revolved, in great part, around a bag full of polyhedral dice and a handful of friends with whom to roll them.

Dungeons and Dragons is something that I heard about at school in probably the 2nd or 3rd grade.  It was the latest in a list of things that adults thought were bad for me – other entries on this list were comic books and chocolate milk – so of course I was intensely curious about it.

I didn’t get my first taste until 1983, though, when TSR released their infamous “Red Box” D&D Basic Set.  A school chum got a copy and, needing someone else to play with, taught me how to roll up a character and how to play.

My first character had middling stats but got a lucky wisdom roll, so of course it became a cleric. This wasn’t a bad choice, in retrospect; D&D clerics at low levels are capable of hanging with the fighter classes in melee and add some spell power to the occasion.  It helped, of course, that we didn’t realize that you could only cast spells once per day, though since my friend was having me play through adventures by myself, it was probably a good thing that I was able to cast Cure Light Wounds as often as I wanted.

As an aside, the “Cleric” illustration in the D&D Basic Set looks like this, which was a source of endless amusement for my friend.  We were young lads in our “girls are yucky” years, after all. 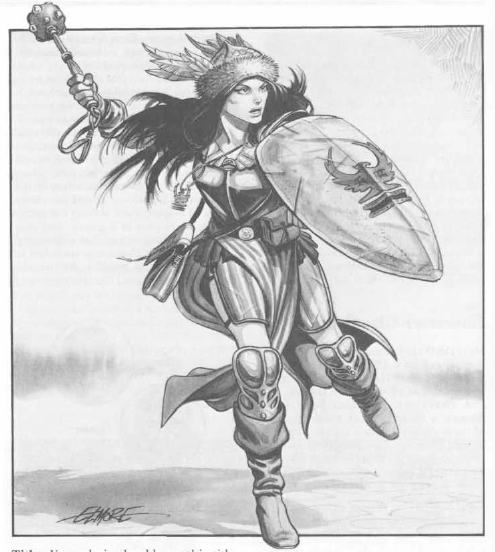 Anyway, that basic set gave way to the expert set and so on, and then we eventually graduated to Advanced Dungeons and Dragons and branched out into Gamma World and Twilight 2000 and, oh, all kinds of different games, and then we hit our mid teens and the whole thing sort of went by the wayside.

Recently, however, I’ve been back in a gaming group, in a campaign set in the Eberron setting, which is, as I understand it, the current Official Campaign Setting of Dungeons and Dragons.

Back in my tender years, the Big Trend in campaign settings was Realism, Realism, Realism – or, at least, a highly fantasized version of Realism which ignored the fact that most people lost all their teeth and died by the age of 30 and were considered to have lived to a Ripe Old Age.

Eberron, on the other hand, is Wizards of the Coast looking at Realistic Fantasy on one hand, and looking at how well the Final Fantasy games sell on the other hand, and deciding that setting D&D in a world with airships and magical Shinkansen trains might not be such a bad idea inasmuch as the kids of today want a little more Cloud and Tifa and a little less King Arthur and Guinevere.

Anyway, it’s taken a little getting used to as an Old Geezer gamer, which is why I recently signed up for Turbine’s free-to-play “Dungeons and Dragons Online”, set in Eberron and thus serving as a rather nice reference to all the back-story that the DM uses rather freely during our sessions but which I have very little clue about.

Eberron is full of that Deep Political Intrigue stuff, after all, with all kinds of Great Houses plotting and scheming against each other, all with Authentic Fantasy Names (which is to say, generally difficult to pronounce and impossible to remember) and it’s a little easier to keep track of when you can attach visual cues to things.

Anyway, so, uh, D&D Online is a game that, until recently, I knew only as “that game that couple was hooked on while their kids starved” which isn’t the best association to have with a game.  Also, it was one of the early high-profile examples of Pay-To-Play games converting to Free-To-Play-With-Cash-Shop, which is to say that it had sort of a stink of failure about it.

Since then, of course, plenty of top-shelf games have done the same and the stigma is somewhat lessened.

Anyway, I spent a couple of hours downloading it, was rather impressed that it asked me if I wanted to use DX11 graphics, was rather underwhelmed by the “DX11 graphics” once I finally got into game and was out-and-out astounded by how poor the character models were for a high-budget MMORPG, but I put that aside in favor of running around the starting area and getting some quests on.

Hey, I just last year subscribed to Dark Age of Camelot and played it for a couple of months, I’m obviously not THAT picky about graphics.

So far it’s, well, it’s not a very polished experience.  Quest givers are a little tricky to find and the first hub town you come to after the newbie area is pretty confusing so far.

That said, I’ve gotten to level 3 – which is not half bad, in D&D terms – and I’m looking forward to starting to tackle level 3 instances so I guess they’ve managed to get their hooks in a bit.  It helps that I got a Big Flaming Sword as an early quest reward.  If you want me to play a game centered around killing things to gather Shiny Objects – which is, after all, a pretty good way to describe any MMORPG – giving me a Big Flaming Sword is a pretty good way to start.

And, after all, the price is right.