Wait, I have a reason to turn on the Wii? 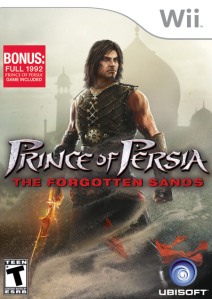 I have to confess that I ran into a bad case of writer’s block about a month ago.

See, after finishing Defense Grid, I decided to play through Brutal Legend, and when I was done with it I simply couldn’t find any way to write about it.

I mean, I loved the story and characters, the art, naturally enough the music… I just hated the fact that the story was far too often interrupted by painful bits of having to play a game I wasn’t really enjoying.  It was at once one of my favorite games of the year and one of my least favorite games, and I simply didn’t have any way to put that into words.

In the intervening month, I’ve played through Hydrophobia, Singularity, Assassin’s Creed: Brotherhood, Ratchet & Clank: Up Your Arsenal, and even taken a couple of hours to play through the bridging DLC that connects Fear 2 to the copy of Fear 3 I have waiting for me to play it, but it all keeps coming back to “man, I should really write something about Brutal Legend”

So, I’ve decided to leave it at what I’ve written so far and get on with today’s topic, which is Price of Persia: The Forgotten Sands.

I did, of course, play Prince of Persia: The Forgotten Sands last year.  I’m quite a fan of the series, where “the series” is something I define as having started with Sands of Time and then not having any more entries until POP ‘2008.

But, I played it on the PS3, and I discovered recently that the Wii version was, in fact, a completely different game and rather well thought of.

Shortly after finding this out, I stumbled across a copy of the Wii game for a hair under 20 bucks, added it to my library, and then forgot about it until the other night, when I finished Ratchet & Clank up and started trolling the shelves for something different.

I’m about three hours into it now – well, since the game doesn’t count the time spent dying, maybe just a HAIR over three hours – and I am nothing but impressed.  Even with the grapevine telling me that the Wii version was something different and good, I had really anticipated Yet Another Shoddy Wii Port, and what I got was a game which might just be my second favorite PoP game yet, and which might even have stood a chance of dethroning Sands of Time if it weren’t for the wagglecombat and the latest in Homicidal Camera Technologies.

It’s pretty (and I hope you’ll just mentally add “for a Wii game” in where it’s appropriate), the environments are nicely atmospheric, the banter between Prince and Companion (something almost completely lacking in the PS3 version) is nicely snarky, and it promises to provide me many more hours of fun times dodging whirling saw blades and arrow traps with Inexplicably Infinite Arrow Supplies.

As a system, the Wii is diving heads on towards its date with the clearance bins.  Its life has been marked by an awful lot of pathetic shovel-ware, just enough first-party titles to keep the Nintendo Faithful, well, faithful, and a bare handful of third party games that have been worth a damn.

As it dies, it’s awfully nice to have found one more title to add into that last category.