But first – we bake!

I have a – and this is a bizarre concept to me – an elementary school “reunion” and potluck dinner tomorrow night. I don’t actually have many memories of my elementary school days, apart from getting in far too many fights and generally not getting along with the nice, sociable and well-adjusted children.

The nice, sociable and well-adjusted children are, of course, the ones organizing this event, so it’s something of a wonder to me that they thought to invite me.

I took the opportunity to try out a recipe for Chinese egg custard tarts that I’d gotten off the recipe spinner at uwajimaya back when they had a recipe spinner instead of selling an in-house produced cookbook. Mental note: I should probably get a copy of their cookbook. But I digress.

Anyway, my reasoning was more or less this: I like egg custard tarts but fear the concept of having two dozen around. It also seemed risky to make such a large batch not knowing how they would turn out.

So making a large batch with the understanding that I’d be taking them to a potluck dinner, where they’d likely get eaten no matter how terrible they were, sounded like a good plan.

As it happened, they turned out quite well – not too sweet, but very rich. I won’t be making them 24 at a time again, though. 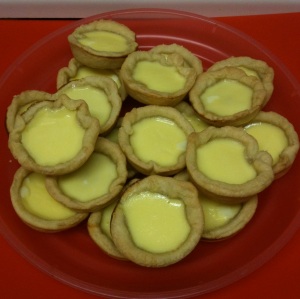 Odd side note. The iPhone went from not knowing the word “potluck” to knowing it and showing it in the predictive type-ahead in the space of this post. Kudos where kudos are deserved.

Followup: Not only did these all get eaten, but they were the first things to completely disappear.  I win at potluck.