One downside to organization…

Posted on September 22, 2007 by baudattitude

I recently hooked up my TurboDuo again. Because I’m organized, see, and I can make a space for more game consoles that I’ve been neglecting.

This was a great system when it came out. It combined a TurboGrafx-16, the CD add-on for the system, an upgraded system card, and a fistful of games for $300.

It also looked damn cool for the time — sleek, black, with an integrated optical drive and cartridge games that were released on the slender HuCard format instead of the massive bulky Nintendo carts. 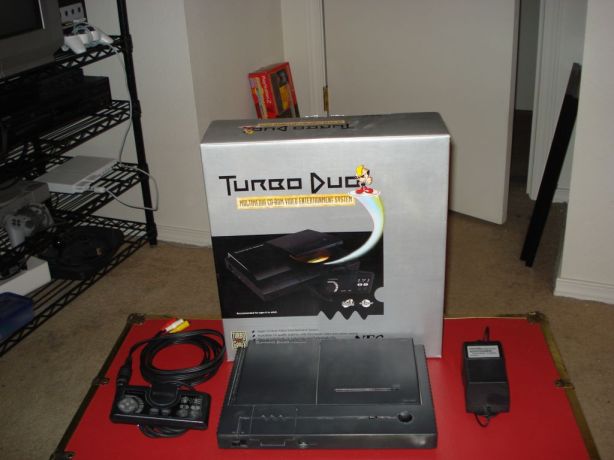 Even looking cool, and including something like 7 free games – It didn’t sell well at $300.

I certainly couldn’t afford one at the time – I was 18 or 19 years old and making a whopping 7 bucks an hour doing technical support.

That I could manage. I didn’t drive at the time, mind you, and the nearest store selling them was the Incredible Universe store in Wilsonville – 80 miles away – so I conned a friend from work into taking me.

He’d never been to Incredible Universe and wanted to see what it was like, so it didn’t take a whole lot of convincing.

The Turbo really started a trend with me that continued for several years with the Saturn and Dreamcast.

I’d fall in love with a games console, feel like I knew some great secret that nobody else understood, rage against the super cool Japan-only games that would surely save the system if the parent company was ever smart enough to release them over here, and eventually watch the thing die.

(Actually, I got in kind of late in that cycle with the Turbo. It was already dead, really, but I hadn’t been through enough console generations to realize this.)

Anyway… I went to hook it up, and no sound came out.

Turns out this is a pretty common failure for the Duo – the capacitors on the system board just eventually fail, and now I’m left with the options of try to fix it myself – unlikely – or send it off to get fixed (and let’s face it, it’s got a 14 year old optical drive in it. Even if it comes back with working sound, it’s got moving parts that are well into their second decade.)… or put it back in its box and settle for playing the games on an emulator.

I guess having the box out of storage and in the picture kind of tips my hand there 😦 It was a good console, and it’s a shame to let it rot away in the closet, but I just can’t justify otherwise.