I’ve been a little obsessed with desk setup videos on YouTube lately.  It doesn’t take much. Once you watch one or two of them, your recommendations feed fills up with dozens more, vaguely sortable into three categories:

1) I AM GAMER, SEE ME STREAM with lots of RGB lighting everywhere.

2) I AM SRS BZNS, SEE ME PRODUCTIVE with a bunch of monitors attached to a sit/stand desk and usually a poster with a motivational quote about how everyone has a plan until they get punched in the face.

3) I AM MINIMAL, SEE ME NOT HAVE STUFF, which is sort of a humble brag about not being bogged down by THINGS and only having roughly six to ten thousand dollars worth of Apple hardware and a single dried flower in a vase on top of a tiny desk.

Of the three, I find myself definitely more fond of the third, so that’s where I took my motivation from for a recent office makeover: 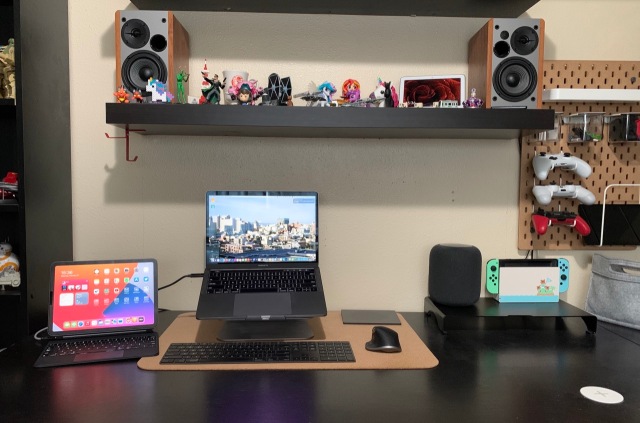 The thing I wanted to focus on was having less stuff on top of the desk, where possible, and trying to make some sense of the massive rat’s nest of cables underneath.

So… technically, yes, this is a lot of Apple products on a desk, but I do somewhat fail in that I don’t even have a single dried flower in a vase.

Not using an external monitor has taken a little getting used to.  Using the Ikea cork desk pad has helped a lot with the transition, because it lets me sit down and slide the laptop forward to a comfortable viewing distance.  The Macbook is connected to a hub under the desk by a 2 meter Thunderbolt 3 cable, and the iPad also connects to the hub with a decently-long Ikea-branded USB-C cable.

The only downside to the long cables is that they do kind of stick out when you look under the desk, but it’s nice to have lots of slack in them.

The wireless charger that I built in to the desk top is also from Ikea, and I decided where it goes by keeping track of where I naturally tended to put my phone when I sat down.

The cables up to the Edifier speakers and to the Google Nest Hub run down behind the pegboard.  They’re not invisible but I’m happy with how hidden they are.

Finally, there’s a HomePod and a Switch.  I’m really not terribly impressed with the HomePod as a smart speaker and wouldn’t recommend it to anyone over the much more affordable Google options.

Underneath, we have the Caldigit TS3+ hub and an eGPU. 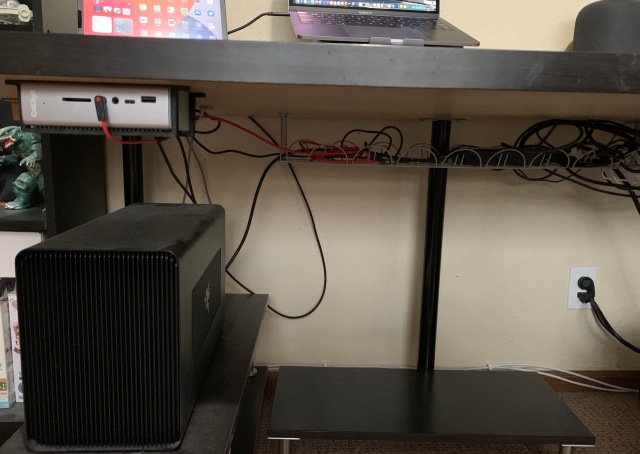 I’m told that you shouldn’t chain an eGPU off a hub, for performance reasons, but I still get 60fps in WoW and FFXIV with it set up like this so I’m good.  I’ll likely be moving away from the eGPU once the 16″ Apple silicon-based Macbooks come out, and that will get rid of the most annoying remaining cables.

This also shows off the one thing that annoys me about the Caldigit hub, which is that the analog audio out is on the front panel and the back panel only has SPDIF outputs.  Edifier DOES make a pair of speakers with an SPDIF in, but it was like 50 bucks more which didn’t seem worth it at the time.  So I just run a right-angle adapter to the analog out on the front of the hub.

A closer look at cable management for the stuff connected to the Caldigit.  I screwed a drawer pull to the bottom of the desk to run cables through.  This was only a couple of dollars and it prevents them from dangling in ways that would be enticing to cats.

The hub is mounted with a 3D-printed mount from eBay.  Technically I could have downloaded the 3D printer file and taken it to the local makerspace, but I’m not even sure if they’re open these days what with the pandemic and all.

Also under here are two SSDs, one for extra storage and one for use by Time Machine.  I was looking at under-desk-mountable drawers to give them somewhere to live, and then I realized that I could simply take some cardboard, bend it into a U shape, and staple it to the bottom of the desk with heavy-duty staples.  Score one point for borderline-redneck engineering solutions.

The powerstrip is mounted on to two wood screws, and there’s also a long strip of industrial-strength velcro tape holding it to the bottom of the desk.  Either of these would PROBABLY have been enough to hold it in place, but using both of them gives me confidence that this thing will resist gravity’s clarion call for a while, at least.  The cable running to the wireless charging pad is prevented from drooping with the aid of some command hooks.

Putting all of this together took the best part of a weekend, mostly because I kept looking at the bottom of the desk and making significant “hmmmm” noises and then walking away for a half hour before I came back to make more “hmmmm” noises before finally deciding on where stuff should be mounted.   I’m pretty happy with the outcome, because I can quickly tuck the MacBook and iPad under the stand the HomePod is sitting on and suddenly I have most of the desk surface completely bare.  I can also go portable very easily if need be.

Most importantly, I was able to reuse things I already had, for the most part, and only spent a little money on the drawer pull and on the Caldigit mount.