So, in the fifteen years or so since I bought my first modern Macintosh (a first-gen Intel Mac mini), our house has turned into a bit of an Apple Shrine.  We have four Macs, an iPhone each, a few iPads, a couple of AppleTVs and even a pair of HomePods, which are Apple’s entry into the “smart speaker” marketplace.

So why do I have THREE Google Nest Minis? 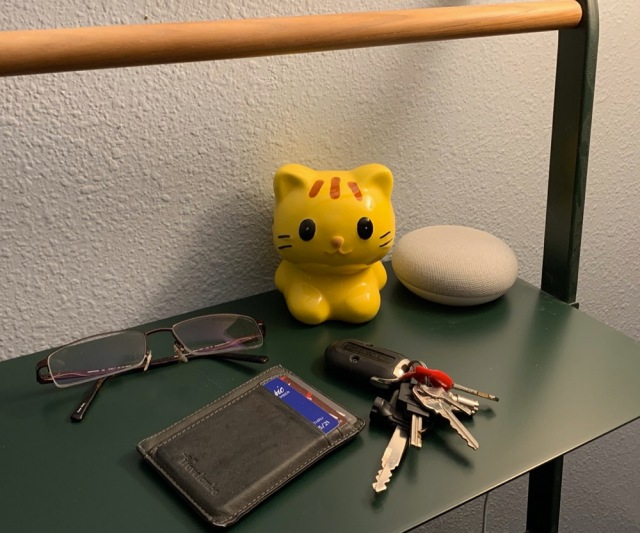 My attempt at a product glamor shot.  Ceramic cat for scale.

Well, it’s a long story that started when Google decided to send one of these things to all of their YouTube Music subscribers.  I signed up for that service ages ago when it was Google Play Music, mostly to get rid of ads on YouTube, and I’ve maintained my subscription because I’m grandfathered in at a low rate and I watch a lot of YouTube and hate ads.

I didn’t see a ton of point to the thing, but I plugged it in so my wife could use it as a bluetooth speaker for her phone.  It’s actually not very good at that as the phone and speaker kept getting unsynced.  She has a newer phone now and they may work better together but we haven’t tried.

Anyway, since it wasn’t a great bluetooth speaker it mostly sat plugged in on an end table doing… nothing, really.  Listening, I guess.  Always listening.  We kind of forgot we had the thing.

It’s critical to note at this point that we don’t have a clock in our living room and that at one point my wife asked me what time it was and I didn’t have my phone handy so I said “OK, Google, what time is it?” and it told us the time and suddenly it had a purpose.

Then I discovered that this freebie speaker was better at answering basic questions than Siri.  Like, if you ask Siri “What time does Target close?” there are a lot of extraneous words before she finally tells you what Target’s hours are. And she tells you the hours, like “opens at 7 am and closes at 11 PM” which is not technically the answer to the question.

Google, on the other hand, says “Target at (address of closest Target) closes at 11 PM tonight”

And then we bought a new smart TV for our living room and the two devices talked to each other and suddenly I could tell the TV to turn on while I was walking into the room while carrying food… and then we discovered that we had quite a few other things, like Xboxes, that could integrate with this free little speaker. So that was kind of neat.

Furthermore, since I DO have a subscription to YouTube Music, it has been invaluable at times, like when I discovered that my wife had never heard EITHER of Golden Earring’s hit songs and I was able to subject her to roughly 30 seconds each of “Radar Love” and “Twilight Zone” before she told me to stop that and never do it again lest I wind up having a smart speaker lobbed at my head.

Then, I was in Walmart and saw these things.

They’re nothing more than crazy cheap Google-compatible switched plugs, but they are crazy cheap.  Like, under nine dollars each.

And also extra Google Nest Minis were only $29 each.

So, I bought two more of them and three of these smart plugs and we’ve got them hooked up to lights in places like the bedroom so we don’t have to worry about the moment between turning off the light and getting into bed which is when the cat likes to dash directly between us and the bed, and we have a house that is, for some definitions of the phrase, a “Smart Home” even though that usually conjures up images of people who have, for some reason, decided that their doorbell needs to rely on wi-fi connectivity.

We are very far from that.

And it has all come together for less than the price of a single HomePod Mini*, which is Apple’s attempt to enter the low end of the smart speaker market.

I don’t have any regrets about owning the HomePods, mind you – they are fantastic-sounding speakers even if Siri is a little slow, and handoff is black magic with how seamlessly it works – but Google’s got something pretty impressive going on here.

* Technically only because one of the nest minis was free.  Otherwise it would be slightly more.