No video game post today.  I have been playing “Ori and the Blind Forest”.  I am not good at platform games, which is something I’ve mentioned here quite often, so I really should not be playing a platform game that was designed for people who ARE good at them.

I am playing on Easy.

So let’s not talk about that.  Let’s talk about this terrifying piece of snack food, the “Birthday Cake Pie”, an incredibly cheap (50 cents) and yet incredibly fattening (410 calories) piece of confectionery: 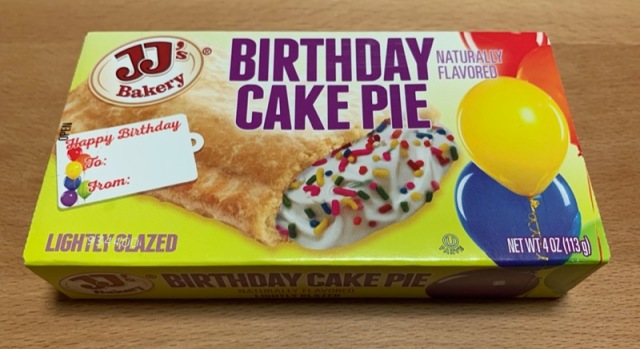 Normally I avoid the Hostess-and-Hostess-Adjacent section of the grocery store, but this thing caught my eye.  I knew it was going to be disappointing, of course, but I needed to know HOW disappointing. 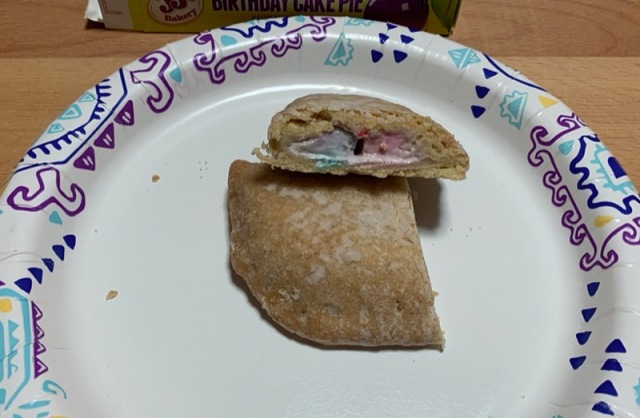 Despite the difference between how this looks in reality and how it looks on the box, I think there may actually have been sprinkles used in the making of this pie.  They’ve all sort of turned into mush in the filling, but the ingredients list on the back swears that there WERE sprinkles and the weirdly-colored filling sort of backs that up.

It also looks rather like something that might show up on Infernal Monkey on a slow post day.  If I only had some googly eyes, I would have slapped them on there to complete the experience.

Well, to my surprise, it actually pulled off the “birthday cake” taste fairly well, assuming that”Birthday Cake” is white sheet cake covered with tons of frosting.

OK, really it was just the taste of frosting, like the entire cake has already been eaten but there’s a little wall of frosting stuck to the side of the cake box and you have decided to scrape the entire mess up with a fork and stick it in your face.  It’s that sort of taste.

I may be revealing a little too much about myself and my relationship with frosting here.

So, to put into a very few words something that I have spent several paragraphs getting to, it’s basically a Hostess fruit pie, only full of cake frosting.  I’m cool with that.

I’m not ever going to eat a second one, mind you.

I MAY get one for the next person I know who is having a birthday and carefully fill out the “to” and “from” on the box and hand it to them and make them eat it.