Well, the dreaded Wu-Han Flu Clan has been spotted in our neck of the woods and we are all being encouraged to, I think the term is, “socially isolate” which appears to be a code phrase for working from home and filling our other waking hours with video games and binging TV and just not ever going outside unless you absolutely have to.

I HAVE TRAINED FOR THIS MY ENTIRE LIFE.

Anyway, prep work for some glorious hermitage included spray-painting “DON’T DEAD OPEN INSIDE” on the garage door and then a quick trip to the grocer to pick up some essentials that we didn’t have in the house, like bananas and sour cream and  paper towels and eight twelve packs of diet soda.

Food?  I think we have some of that already.  There’s a couple frozen pizzas anyway, last I looked.  And some instant noodles that probably haven’t passed their expiration dates.  We’re good.

The lines at checkout were, as you may imagine, fairly long.  A mild inconvenience, of the sort that has you randomly browsing the carefully-arranged shelves of impulse purchases.

And that’s when my wife said, half to herself, “I wonder what flavor ‘Troll’ is?”

Following her gaze, I found her looking at a display of officially-licensed “Trolls: World Tour” Oreos, and picked up a package to see if I could answer her.

There was no answer to be found on the packaging.  It emphasized the pinkness and the glitteryness of the contents, but yielded no clues on the actual taste experience.

Naturally this bore further study, and a package made its way from the impulse-buy shelves into our cart, proving yet again that I am very susceptible to things that are bright and shiny.

Opening this package and extracting some of the contents.  Apparently the movie has some sort of musical theme to it.  I vaguely remember seeing a trailer.  It may have been in front of Frozen II?

Side note: I was quite sure that the homicidal horse in Frozen II was a kelpie and I was very happy about that, since kelpies are one of the things from the Monster Manual that rarely feature in fiction.

OK, so kelpies weren’t IN the Monster Manual but WERE in the Field Folio but were represented as women rather than horses.

Erm. I appear to have gotten off track.  Anyway, the horse from Frozen II seems to have been a Ceffyl Dŵr, or Water Horse, which isn’t actually a kelpie but is like the Welsh equivalent.

I should get back to the cookies, huh. Let’s do that.

The filling is not particularly glittery but it IS pink.  Not a pleasant pink, either.  I am very fond of the sort of coral pink that Nintendo used for its pink handhelds.  This is not that.  It’s an aggressive pink, the sort that screams that these cookies are NOT FOR LADS. 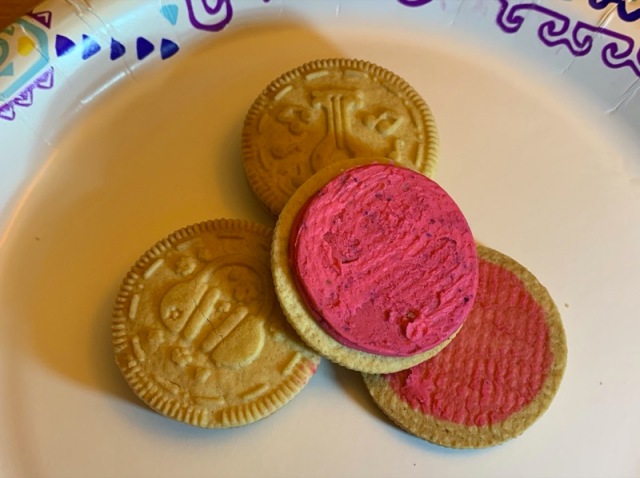 I’m not particularly GOOD at being a lad, mind you.  I have never changed my own oil or butchered a deer or opened a bottle of beer with my teeth, so I figured I could go ahead and eat the pinkness.

After the first cookie, I was not entirely sure they had a flavor.  There was a sweetness, and a sort of unpleasant aftertaste that suggested that eating a second cookie might be a good idea to drown that aftertaste out, so I did that and still wasn’t able to pinpoint just exactly what it tasted like.

A third cookie likewise failed to assist in reaching a conclusion, at which point I realized that I had eaten 225 calories of Troll-themed Oreos in roughly 30 seconds and that I should probably stop.

So, if I had to put a name to the flavor of Troll, I would have to go with “regret”.