In which, one thing leads to another and I buy clothing.

A few days – maybe a couple of weeks ago – my twitter timeline basically exploded with Japanese Red Cross blood-drive posters.  Apparently, some genius at that organization decided that (a) nerds have blood, (b) the Red Cross would like more blood, (c) nerds are very weak to the power of 2D jubblies and (d) that taking advantage of (c) might result in a positive outcome with regards to their goal (b).

Hence you get posters like this one.  This is a blood drive poster. 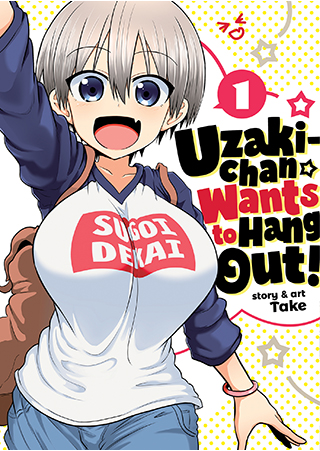 Anyway, it turns out that the character here is the titular – I’m not even sorry – character from the manga “Uzaki-Chan wa Asobitai!” or “Uzaki-Chan Wants to Hang Out!” in its English translation, which I started reading purely because of the power of aforementioned 2d jubblies and because it looked like it was a manga about maybe a vampire waitress or something?

It turns out that the fang on the poster isn’t actually a vampire fang and the waitress thing is only a side job.  So that thing about not judging a book by its cover is still a pretty good aphorism.

Rather, Uzaki-chan is a bubbly and energetic and very friendly college student who has an older classmate who just wants to live a quiet and solitary life and go to his part-time job and focus on his studies and instead has this girl who thinks that such a life is VERY SAD and should be avoided at all costs and makes avoiding that her life’s purpose.

It’s pretty damn funny.  If you like slice-of-life manga, I fully recommend it.

Anyway, Uzaki tends to run around in a shirt with SUGOI DEKAI (“Super Huge”) proudly emblazoned across the chest area, and there are entrepreneurial sorts of people on the internet who have realized that this is a very simple design to copy.

And it is, in my mind, the perfect nerd shirt.  It is absolutely meaningless to anyone who isn’t familiar with the property, so it fades into the background of random brands we are all exposed to on a daily basis.  It’s still super nerdy but anyone who would know that is probably in on the joke.

So I bought one. On the other hand, upon taking it out of the packaging, I had the immediate realization that, as a male-type person, I absolutely was not SUGOI DEKAI in the appropriate torso region, but that as a slightly-pear-shaped North American male-type person I was maybe a little bit SUGOI DEKAI if the print was only moved about a foot down the shirt.  So it’s really not FOR me.  I am still going to rock it with pride.

1 Response to In which, one thing leads to another and I buy clothing.