So, this blog turned 12 at the start of March, and I completely missed the opportunity to pat my own back at the time.  Now that I’ve realized that, just assume that I have had a sad little party with me and a cake with a novelty candle shaped like the number 12.

On the other hand, I have a different anniversary coming up at the end of the month.  It’s nearly 12 years since I finished Star Wars: Battlefront II, felt really good about that, and went on to play and finish Geist in, like, the same week.  It really marked the switchover from buying a ton of games and never playing them to the point where I was still… buying too many games, but occasionally playing them to completion.

It was a few years later that I signed up for a backloggery account, and this is where I’m at today:

9 of those unfinished games are various Kingdom Hearts titles because I was dumb and bought the super deluxe version of Kingdom Hearts III that came with remastered versions of all the earlier games, and I have yet to tackle them because it’s kind of daunting.  I am a bit of an idiot sometimes.

Also, because I’m a total data nerd, here’s the breakdown by console generation and by year.  The trends aren’t anything too weird, except for 2010.  That appears to have been the “working through my Sega Saturn collection” year, and 2017 was the let’s-just-clear-out-the-old-stuff year. 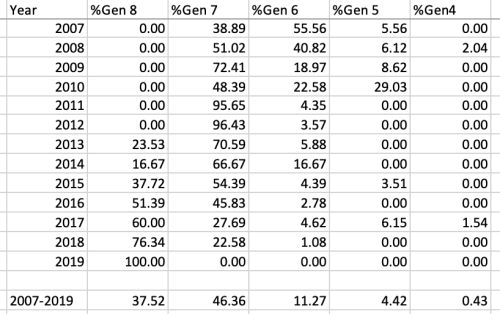 I mostly follow Wikipedia’s list of console generations, flawed as it is.  I disagree with it on the WiiU, which I consider a 7th generation console. Basically, WiiU is to Wii as the Atari 5200 is to the Atari 2600, a more powerful version of a vastly more popular console with a godawful controller but not enough to signal a generational shift.

Yes, I know that the 5200 wasn’t innately backwards compatible with the 2600 and you needed an add-on.  Look, it’s not a perfect analogy.  Let’s just accept that I am insane and move on.

2013 and 2014 were some pretty iffy years, huh.  I appear to have been mostly working through 360 and PC3 titles still – looking back at 2013 and 2014, almost all of those “Gen 8” games I finished were Vita games.  The only PS4 game I got through in that two year stretch was Call of Duty: Ghosts.  Small wonder that some people were trying to convince us all that high-budget games were dead and that the future was mobile games and walking simulators.

Not that I mind the occasional walking simulator.  I just played through “Soma” the other night, and that’s basically a walking simulator with about a dozen points where you meet something that can kill you – and you can set the monsters to non-lethal mode, if you want a less stressful time of things.  I also quite liked Dear Esther and Gone Home.  Sometimes it’s good to just be able to absorb yourself in an atmosphere without a ton of conflict.

On the other hand, I just started “Ghost Recon: Wildlands”, and part of the character creation process was choosing between 46 distinct shirts.  Not kidding about that, either.  46 different shirts in a game where I will almost always be looking at my character’s backpack.  That is the epitome of just throwing budget at a game without really stopping to wonder whether they should.

But I picked the perfect medium blue button-down shirt, and that’s very important to me.

Anyway, 11 months until this thing turns into a teenager.  Maybe I’ll get through those 33 unplayed games by then?