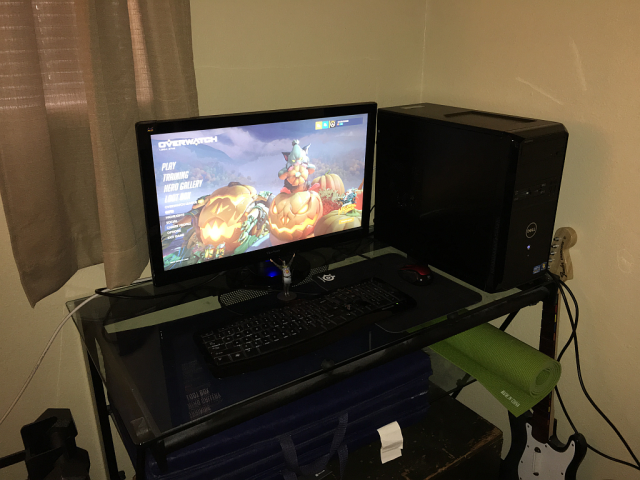 A few months back, I brought home some gutted PCs from a local business’s electronics recycling pile, based on the notion that I always have projects going that need new server hardware and some of them looked like they had some years left in them. They’d all been rudely ripped open and had their hard drives pulled out, and some had lost their RAM as well.

They’ve been sitting in my garage ever since, and my wife has been polite enough not to point this out.

In an unrelated bit of news, I bought a cheap video card for my Linux server since it was getting used more these days. Specifically, a 2 GB Nvidia 1050. I chose this card because it didn’t need any auxilary power inputs and because it was, well, pretty cheap. It was $121, but I had a bunch of Amazon credit built up from using their credit card and getting cash-back points and that covered most of it.

Anyway. I put the video card in the Linux box, verified that it worked, and then had a crazy idea.

I confess to being more than a little penny-wise and pound-foolish when it comes to PC gaming. Sure, I’ll watch my Steam Wishlist like a hawk, waiting for games to drop to 70% off, but on the other hand I REALLY want to be able to turn up all of the shinies and run games in 4k, and that comes with a price.

So, I’m not usually a guy to talk about “budget” gaming.

Still… I got to wondering what I could make out of one of the computers I’d literally saved from the trash heap.

The most promising candidate from the stack was a Dell Vostro 260. This is a home-or-small-business-oriented box from 2012, with an Intel i5-2400 processor. If you’re not lucky enough to grab one out of a pile of scrap machines, you can get one off eBay for under a hundred bucks, which will likely have the 500GB hard drive and 4-8GB of RAM standard at the time of production. There are an endless number of similarly-uninspiring boxes from the same era. 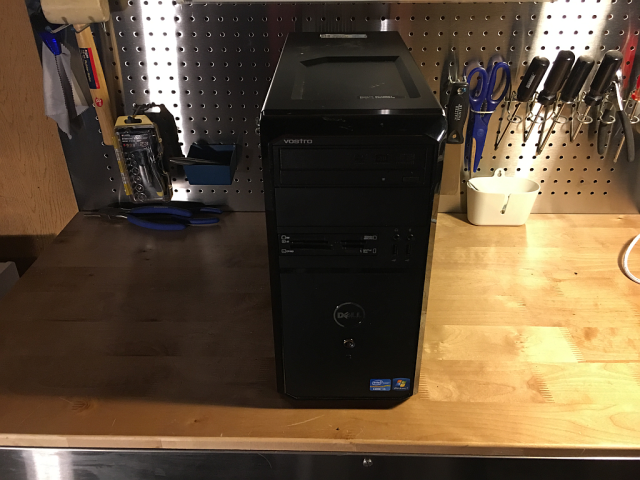 The Vostro is not designed for upgrading – it only has a single PCI-e x16 slot and 2 DRAM slots. The hard drive mounts on some annoying proprietary rails, and those were pulled out along with the hard drive when it was being prepared for recycling. Fortunately, there was a second hard drive bay that still had rails in it, but I’ll never be able to add another disk unless I track down some more Dell rails.

As I mentioned, most of the machines in my pile had been stripped of RAM, but I scrounged through some of the other boxes and came up with 8 GB of 1333MHz DDR3 DRAM, the most this thing will support.

If I’d needed to buy RAM, this might actually have been kind of expensive – there’s enough computers that use DDR3 that the stuff is still in some demand. If you’re starting from the step of buying an older PC, try to get the 8GB up-front.

The hard drive I used was a 3TB 5400rpm drive that had been part of a NAS that I’d upgraded – slow, but high capacity. Again, “budget” is being helped by the fact that I had stuff lying around.

After I added some storage, the next feat was to get an OS installed on the thing. It had originally shipped with Windows 7, and the product key sticker was still stuck to the case, so all I needed to get was a Windows 7 installation disc. Microsoft makes ISOs available online, so that part was easy enough. I understand that you can also use a Windows 7 key to activate Windows 10, and I am actually a big fan of Windows 10, but for the purpose of this experiment I am sticking with Windows 7.

I hit a small snag after the Windows 7 install completed – the OS didn’t have a driver for the network hardware, so it wasn’t able to get out to the internet for updates. Fortunately, Dell makes drivers pretty easy to find on their web site, so I just sneakernetted the driver over on a USB thumb drive and I was off to the races for a three hour Windows Update download session… and then a long install session, and… well, really you should plan to watch your “new” PC churn for a good 5 or 6 hours, all-told, before you will be able to do anything past that. I strongly recommend just letting the computer sit at the desktop while it chugs away. This is where I REALLY felt that slow drive – while the PC was in this initial state, getting anything done was painfully slow and accompanied by the sound of a hard drive straining to keep up.

The final step was to figure out why it made a constant infuriating rattling noise, and I finally tracked it down to a side panel that had been warped when it was being gutted. I put it over my knee and bent it back the other way and the rattle was gone. This thing does NOT have a particularly high-quality case, is the point I’m trying to get at.

After that, the obvious thing to do was install some games and see how they ran.

I went through my Steam library to find games with built-in benchmarks, and came up with Batman: Arkham City (2011), Batman: Arkham Origins (2013), Bioshock Infinite (2013), F.E.A.R. (2005), Just Cause 2 (2010), Rise of the Tomb Raider (2016), and Tomb Raider (2013). Square-Enix also published a stand-along benchmarking tool for FFXV, so I downloaded that as well, and I installed Dark Souls III and Skyrim: Special Edition as good games to try out, even if they didn’t have formal benchmarks. For the heck of it, I put Overwatch and WoW on as well – they’re Blizzard games, so there really wasn’t any question on whether they’d run smoothly, but what the hell.

I’m not playing WoW, just to be clear. Blizzard sent me a 3-day “try our new expansion!” code, and it seemed a good use of it.

My testing methodology was not particularly exhaustive. I loaded up each game, set it to 1920×1080, turned off V-Sync if I could, and set the graphics quality to “Medium” or “Normal”, then ran the benchmark. I then ran the benchmark a second time, this time with the game set to higher quality settings.

Batman: Arkham City runs brilliantly in both Normal Mode and in “DX11 Enhanced” modes. There was a notable “hitch” when the benchmark changed scenes – that 5400rpm drive really hurts loading times – but it still clocked in at an average 82 FPS in Normal, 73 FPS DX11 Enhanced.

Batman: Arkham Origins likewise ran like a charm and turned in an average 143 FPS on Normal. This game has a lot of PhysX enhancements that tank the framerate hard when you turn them on, but even with that I still saw an average 65 FPS in “super shiny” mode.

Bioshock Infinite has an external benchmarking tool. On Normal, it gave me an average 181 FPS, and even setting it to “Ultra DX11” still clocked in at 133 FPS.

F.E.A.R…. well, I confess F.E.A.R. doesn’t even belong in this list. It’s a 13 year old game! I have it in here because it used to give my Core2Duo fits trying to keep up and I wanted to see how it would run.

For the record, an average 286 FPS. I felt a little satisfaction.

Just Cause 2 has three benchmarks, but I ran through the Concrete Jungle one on Normal and Maxed settings. 83 and 67 FPS, respectively.

Rise of the Tomb Raider was the first game to really make this box sweat. On “Medium”, it managed an overall average of 54 FPS, but setting it up to Very High tanked the average frame rate dramatically – I couldn’t even break double-digits, and the hard drive sounded like a rock polisher while it was running.

It turns out that RotTR is designed kind of oddly. If it can’t load all of its textures into the graphics card’s VRAM, it uses the swapfile pretty hard-core, and the swapfile was on a painfully slow 5400rpm drive I’ve been griping about throughout this post. Moving the swapfile to an SSD brought the average FPS up from 9 to 25, and setting the Texture Quality to Low while keeping all other graphics options at “Very High” levels delivered an average 42 FPS.

Still, playing on Medium sounds about the sweet spot.

Finally, the box didn’t even flinch at running the 2013 Tomb Raider reboot on Normal or High (or Ultra!) settings. I had it all the way up to the “Ultimate” graphics setting before I could even get the average FPS down to 58.

The FFXV benchmark doesn’t report any FPS numbers. It instead runs through a 6.5 minute demo and gives you a score – the higher, the better – at the end. On “Standard” settings, this machine scored 3619, which Square says will deliver an acceptable game experience. Dropping the benchmark down to the “Lite” settings came in rather better, at 4715. 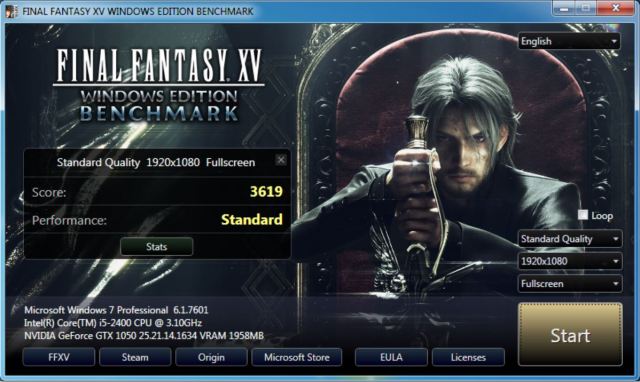 For the games without demos – Skyrim Special Edition and Dark Souls III – I mostly just turned on Steam’s FPS display and ran around and killed a few things. Skyrim delivered a pretty solid 60fps on the “High” graphics setting, but Dark Souls was a bit more taxing. On “Medium”, I saw frequent dips below 60fps, though never below 40.

I rolled through all of these scrolls and pots and crates.  Stuff was flying EVERYWHERE.  Framerate dropped to 51.

The Blizzard games, as you might expect, had no trouble. I played several matches of Overwatch with the graphics set to “High”, and the in-game counter never said anything other than “59” or “60”. I probably had Vsync on, come to think of it.

I got a quad kill with D.Va’s ult. I’d like to thank everyone who made this PotG possible.  Specifically, the other team for not running away in time.

WoW doesn’t have named graphics settings, but it recommended that I use quality “4” graphics. I elected to turn it up to 7 – I like the number 7 – and ran around, took some flight paths and healed a group through the Halloween event dungeon without seeing the frame rate drop below the high 70s.

Yes, I queued for a group as a healer despite not having played in over a year.  I’d have felt bad about that if anyone had died.

So, that was an awful lot of time spent proving that I have wasted a lot of money chasing the 4K demon. The computer I used for all of these tests was – LITERALLY – a piece of garbage and was being thrown out as no longer fit for purpose. Adding a $120 graphics card and replacing the bits that had been stripped out of it turned it into a PC able to play DECADES worth of games at full 1080P quality. For another 60 bucks, I could have gotten the 1050ti with 4GB of VRAM and been just ridiculously ahead of the power curve.

If you need me, I shall be sobbing quietly in the corner.