TERA, the Olive Bandit Mask, and me.

I’ve been comfortably MMO-free most of the year, and it’s been a good thing.  It’s not that I’m being particularly productive or, you know, DOING anything with my life, but at least I’m playing a lot of games that have definitive endings.

But, when I DO sink back into MMOs, I frequently wind up back in TERA because it’s got some of the best combat in the genre and I get to play a character best described as 4 feet of rage with an 8-foot axe.  And, with the recent announcement that it’s coming out for modern consoles (sorry, Switch owners), I figured that I should probably log in to make sure that my character names are safe.

It turns out that I logged in just in time to realize a major milestone.

See, TERA came out just over five years ago, and I picked it up in the first couple of weeks.  Then my wife wanted to give it a try, so I gave her my account and made a new one (this also gave me an excuse to buy the collector’s edition for pack-in goodies, I was not being entirely altruistic)

One of the things that I got through ordering the collector’s edition from Amazon was an in-game reward of a cosmetic item called the Olive Bandit Mask – at least, in theory.  It’s been in my Item Claim Window ever since, but I’ve never been able to actually get it on any of my characters.  I just get an error message when I try to accept the item: 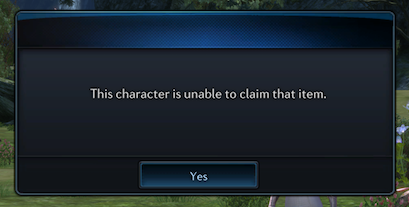 So, not a BIG loss, because I’m not sure that I particularly WANT an Olive Bandit Mask on any of my characters, but it is always at the very top of the item claim window reminding me that it’s theoretically there.  It pokes me right in the OCD.

IT’S ALMOST GONE.  Four more days and it will just poof into the virtual ether, ever unclaimed (though not for lack of trying) and I will not see it any more.

I may have to log in around 1 PM on the 19th just to count down the minutes.  Also to run around as a bunny girl with a giant axe, of course.