How About A Game Of Lucky Hit?

Posted on February 9, 2017 by baudattitude 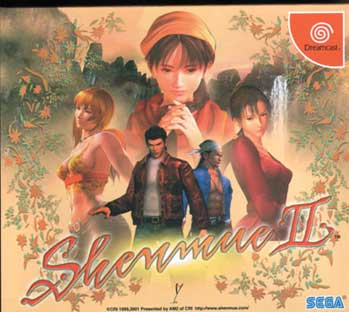 So, it’s been roughly ten years since I played the first Shenmue, and I understand they’re actually planning to make a third one.  In addition, Shenmue II is the last Dreamcast game sitting in my backlog after I came to terms with abandoning a couple of really long RPGs.

So, getting around to playing it sounded like a good idea.

I even considered – briefly – replaying the first game, as I’d completely forgotten almost everything about it except (a) your father dies, (b) there is a kitten, (c) you have a bro friend in a great suit and (d) there is a fantastic bro fight at the end where you and your bro need to beat up like a hundred guys.

Rather than playing that game (forgive me, I couldn’t stand the thought of all those forklift races again), I tracked down Shenmue: The Movie on Youtube and watched it.  It confirmed three of the things I remembered about the first game, though it didn’t touch on the kitten at all so I am still filled with vague dread about whether it got adopted or not.  I’m pretty sure it did, it would have been super sad if it didn’t and I doubt I’d have kept the second game if so.

Then I went to start Shenmue II, which involved digging a Dreamcast out of a box and remembering that the game is a PAL copy and my DC is a US DC and I had no idea where my Gameshark boot disc is so I had no way to play it.

Thankfully google came to the rescue, and I found a burnable boot disc and the software to burn it with AND the plug-in for the software so it knew how to burn a Dreamcast disc.  Even more thankfully, I actually had a few CD-Rs lying around.

So now, only about 15 years late, I’m finally getting around to starting Shenmue II.  I’ve played about three hours so far and don’t honestly know if I’m going to be able to finish it – I’m pretty broke, the hotel manager wants me to come up with HK $38 a night, and I’m not doing so hot at the part-time jobs.  This is kind of tedious for a game about tracking down the guy what killed my dad.

I’ll give it another couple-three hours.  Hopefully my bro will show up again at some point.

2 Responses to How About A Game Of Lucky Hit?