Thank Heaven for Save States

Posted on February 3, 2017 by baudattitude

Getting around to Klonoa: Empire of Dreams the other day was a pretty deep dive into the backlog.  I’d had the cartridge for probably 15 years and it needed to be played.

It was not the oldest thing in the backlog.  That honor, as it were, went to a pair of MegaCD games that I bought, well, back when you could walk into an import game store and buy new MegaCD games off the rack.  I no longer HAVE a MegaCD, but thanks to the excellent OpenEmu that wasn’t a problem.

The first one, Keio Flying Squadron, was the first “cute-em-up” I’d ever played, and one of the first to come out in the US period.  I think that it was probably beaten by Magical Chase for the TG-16, and maybe Cotton (again, TG-16) but not by many years.

In a time when anything Japanese tended to get localized to within an inch of its life, it was a novelty – JVC pretty much dubbed over a little of the Japanese dialog, slapped some English on the title screen and sent it out to die. 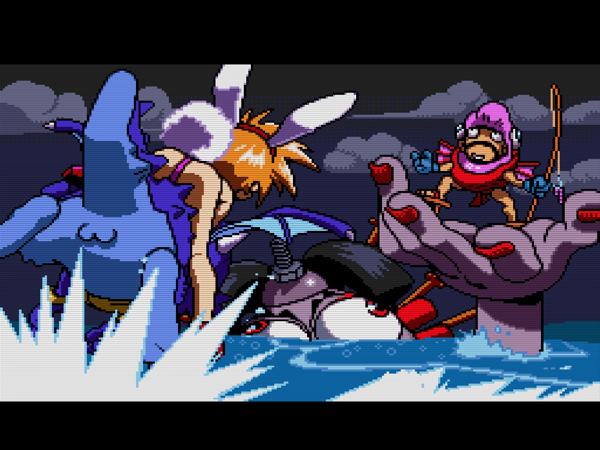 No, really, this game got absolutely no oversight from any American localization team.

As games of the age go, it’s not too difficult and you can set it to give you a ridiculous number of lives.  It does have a ton of cheap deaths if you linger too near the left edge of the screen, but that’s kind of a staple of the horizontal shooter genre.

Keio was marketed with the slogan “Strap on your bunny ears, and save the world”, and that really should prepare you for the challenges ahead.  You’re a young girl with a pet dragon and a penchant for bunny outfits, your family’s heirloom treasure is stolen by a hyper-intelligent tanuki, and you need to go get it back or you won’t get any dinner.  Your opponents are, well, weird.  Kappa, Oni, the US Navy (Represented by Uncle Sam in a battleship), cats powered by hamster wheels… 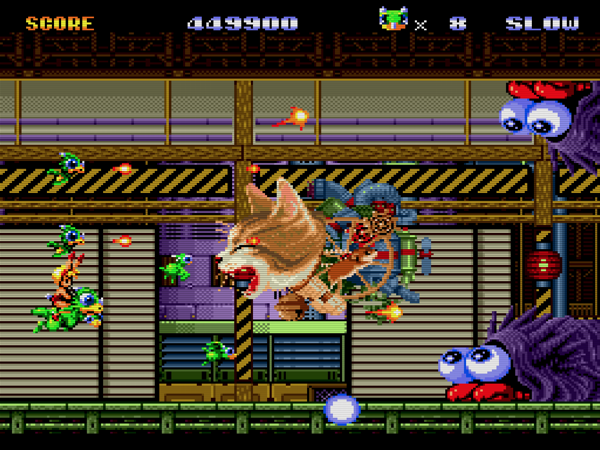 …drug laws are VERY strict in Japan so I really have trouble explaining some of them.

Anyway, while I’d played the sequel (a platform game, oddly enough) a few years back, I had never gotten around to beating the original.  I won’t make any pretense of having done it without abusing save states a LITTLE, but when you’ve owned a game as long as this sometimes you just want to see the end credits.

The second MegaCD game off the shelf was another horizontal shooter, Bari-Arm.  Not a name that makes THAT much sense, so when they released it in the US it got tarted up as “Android Assault: The Revenge of Bari-Arm” which gives a little more insight into the game’s contents.

It’s a much more serious shooter than Keio, with no silly enemies and a plot that can be summed up with “there are aliens attacking earth, and you have a fighter plane that can transform into a mecha.  Do the needful.”

Also your character doesn’t wear a bunny costume.  For much of the game this is not made 100% clear – you COULD be wearing a bunny costume in that plane, we can’t REALLY tell… but the end credits show you standing outside your giant mecha and you are in a perfectly normal flight suit.

It DOES have a very cool soundtrack and robot designs.  It’s VERY 90s anime.

On the down side, it was a much more trying experience.  For one thing, the game has four different types of weapons, two of which are absolutely useless, and one of which makes it nearly impossible to kill the last few bosses.  It also revels in the cheap deaths, even on “Easy”, to the point where I’m wondering if it was balanced around slowdown that isn’t present when played in an emulator.

Put it this way: When I played “Keio” and got to a boss, I would usually set a save state before the boss, then die a couple of times figuring out the boss, then restore the save state and fight the boss again knowing roughly what it was going to do.

In Bari-Arm, I was setting a save state roughly every ten seconds during the last two end-of-level boss fights, just because I’d managed to land a few lucky shots and desperately wanted to save that progress.  It was a tedious, eye-straining affair.

To be fair, both of these were quite expensive games at the time and needed SOME difficulty to prevent a player from blowing through them in no time at all and feeling like they’d wasted money, but Bari-Arm pushed the boundaries well past my normal comfort zone.

Still, that’s one more system I can mark off the list.  I have one more GBA game and two WonderSwan games and I’ll have those marked off as well.  Woo for progress.

2 Responses to Thank Heaven for Save States