Posted on September 18, 2016 by baudattitude

Actually ended the day at level 52.  Dungeon XP seemed to kind of slow down in the low 40s but kicked up again with a vengeance once I started getting dropped into Stratholme dungeons – there’s a ton of stuff in there to kill and groups mow it down fast.

I continue to be surprised by the performance I’m getting out of my entry-level iMac.  There can be a good twenty enemies on screen, and four other players besides myself, with all kinds of spell effects going off everywhere, and the frame rate stays nice and smooth.  I quite honestly find myself marveling at what Blizzard manages to pull off here, and I’m sure it’s a strong contributing factor to their position in the MMO market.

Also, because playing two MMOs at once is always the VERY best of ideas, I logged in to EQ2 for a couple of hours and had one of the best days I’ve had in EQ2 in a very long time.

First: A couple of weeks ago, Daybreak gave everyone the opportunity to create a near-max level character or boost an existing character for free.  Suddenly, the game was flooded with new level 95 characters with… needs.

New characters need food, they need gear enhancers (EQ2’s are “Adornments”), they need ammo and teleportation devices and all kinds of other gadgets, and the hordes of new alts stripped the market clean of everything that was reasonably priced in very short order.

I have five max-level crafting characters and, with virtually no competition and massive demand, I felt NO shame in pricing stuff at well above market rates, with the result that…

…I’m officially an EQ2 millionaire now.  It’s a milestone without a lot of practical use OUTSIDE of game, though you can buy subscription time from other players with in-game currency and I have enough to pay for my subscription for about six months should real-world money get tight.

For now I just get to sit back and revel in my virtual riches.

But, more importantly, while I was logged in and making more stuff to put up on the marketplace, I saw some people recruiting for people to join a pickup raid, and since I was just baking virtual food I volunteered to join them.

We did what EQ2 calls one of their “Fabled” raids – it’s an old raid, originally designed for level 70 characters, that has been re-tuned for level 100s.  It doesn’t have a particularly complicated strategy to follow, but you need a couple of tanks who can coordinate or things go very badly.

Anyway, the reason people do this particular raid is that it has about a fifty percent chance of dropping an Exceptional Jewel.  There are about twenty different kinds of jewels, all with similar base effects, but all of which are really sought after because they make up the final item in a SET of jewels.  You can buy the first seven from players (much of my broker proceeds of late have been from these jewels), but the 8th jewel only comes from raid content.

Then, of course, when you DO see the absolute perfect one you need, you have to fight with everyone else who’s been waiting for that same jewel.

In my case, it was the one-in-two chance to see a jewel, the 1-in-20 chance that it was the one I have been watching for, and the top roll against five other players to get the thing, but: 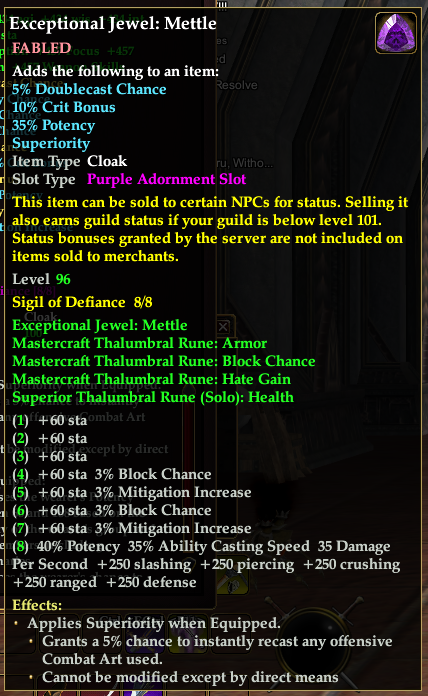 Anyway, I get to have New Item Glee for at LEAST a week now.  Maybe more.